Elephants are among the most intelligent non-humans, arguably on par with chimpanzees, and both African and Asian elephants are endangered.

In 1995, 16-month old Kumari, the first Asian elephant born at the National Zoo in Washington, DC, died of a mysterious illness. In 1999, Gary Hayward of Johns Hopkins University and collaborators published their results identifying a novel herpesvirus, EEHV1 as the cause of Kumari's sudden death. They now show that severe cases like this one are caused by viruses that normally infect the species, rather than by viruses that have jumped from African elephants, which was their original hypothesis.

At the time of Kumari's death, anti-zoo activists seized on the situation to call for abandoning all efforts to breed Asian elephants in zoos, as they claimed that zoos were spreading the deadly herpesvirus, says Hayward. 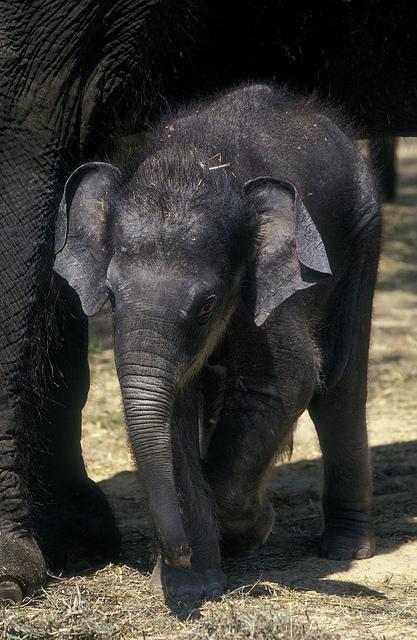 Contrary to that, in the current research, "We showed that whereas some identical herpesvirus strains infected both healthy and diseased animals concurrently at particular facilities, the majority were different strains, and there has not been a single proven case of the same strain occurring at any two different facilities," says Hayward. "Therefore, the viruses have not spread between zoos, and the sources of the viruses were most likely wild-born elephant herdmates. In fact, we also found the same disease in several Asian range countries, including in orphans and wild calves, and showed that the EEHV1 strains in India displayed the same genetic diversity as those in Western zoos."

The papers also provide substantial data to support the hypothesis that the EEHV collectively represent a new, fourth major branch of the herpesvirus family, the proposed deltaherpesvirus subfamily (Deltaherpesvirinae), says Philip Pellett of Wayne State University, Detroit, who wrote an invited Commentary which accompanied Hayward's papers. "Given that the three other branches were recognized over 30 years ago, establishment of a new subfamily would a big deal."

Pellett adds that "Further scientific significance arises from the discovery of 12 new herpesviruses and identification of some new wrinkles in our understanding of herpesvirus diversity and evolution."

In these studies, the investigators performed extensive DNA fingerprinting of the genetic signatures of all the known EEHV cases, as well as samples of EEHV virus that were obtained from wild Asian and African elephants, says Hayward. In the process, they identified seven different species of EEHVs and multiple different chimeric subtypes and strains of each.

"Because these viruses cannot be grown in cell culture, we had to develop sensitive and specific PCR techniques to be able to identify and compare the sequences of multiple segments of many different types of EEHV genomes directly from pathological blood and tissue DNA samples," says Hayward. "Later, by also examining benign lung nodules from culled wild African elephants, we determined that EEHV2, EEHV3, EEHV6, and EEHV7 are natural endogenous viruses of African elephants, whereas EEHV1A, EEHV1B, EEHV4, and EEHV5 are apparently natural and nearly ubiquitous infections of Asian elephants that are occasionally shed in trunk washes and saliva of most healthy asymptomatic adult animals."

Hayward notes that only one example of a lethal cross-species infection with EEHV3 into an Asian elephant calf has been observed, and that the viruses causing disease normally do so only in their natural hosts.

In another paper in the same issue of Journal of Virology, Hayward et al. demonstrate that the many highly diverged species and subtypes of EEHVs are ancient viruses that evolved separately from all other known subfamilies of mammalian herpesviruses within the ancestor of modern elephants, beginning about 100 million years ago.

Philip Pellett, of Wayne State University School of Medicine, Detroit, praises both of Hayward's studies in this issue of the Journal of Virology: "The information gained in the new EEHV papers will be important for developing diagnostic tools for these viruses, and for developing therapeutic approaches to diseases caused by EEHV."

Elephant populations have been plummeting. African elephants declined roughly from 10 million to half a million during the 20th century, due largely to habitat destruction, and intense poaching has since further decimated their numbers. Asian elephants, once in the millions, now number less than 50,000. They are threatened mostly by habitat fragmentation. Poaching is not an issue since they lack tusks.