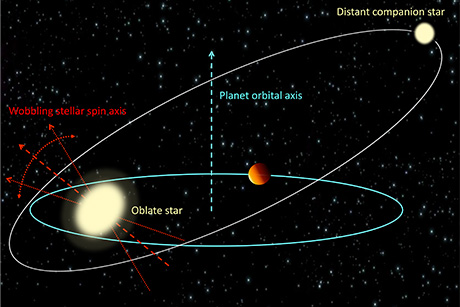 Hot Jupiters wander from distant places to orbit extraordinarily close to their own suns. So far as astronomers know, this only happens in binary star systems. Partner binary stars, some as far away as hundreds of astronomical units, 93 million miles, the distance between Earth and the sun, each, influence the giant Jupiter-like planets through gravity and cause them to falter into uncommon orbits; that, in turn, causes them to migrate inward close to their sun.

“Although the planet’s mass is only one-thousandth of the mass of the sun, the stars in these other solar systems are being affected by these planets and making the stars themselves act in a crazy way,” said Dong Lai, Cornell professor of astronomy and senior author on the research.  “When exoplanets were first found in the 1990s, it was large planets like Jupiter that were discovered. It was surprising that such giant planets can be so close to the parent star. Our own planet Mercury is very close to our sun. But these hot Jupiters are much closer to their suns than Mercury.”

By simulating the dynamics of these exotic planetary systems, the astronomers showed that when the Jupiter-like planet approaches its host star, the planet can force the star’s spin axis to precess (that is, change the orientation of their rotational axis), much like a wobbling, spinning top.

“Also, it can make the star’s spin axis change direction in a rather complex – or even a chaotic – way,” said Lai. “This provides a possible explanation to the observed spin-orbit misalignments and will be helpful for understanding the origin of these enigmatic planets.”