Given its rampant crime, corruption and money issues, a lot of residents of Illinois publicly wish they could give Chicago away. They almost never had it at all.

The original proposed northern boundary of Illinois was a straight line from the southernmost tip of Lake Michigan to just south of the Rock and Mississippi River confluence - had it been approved,  the northern 51 miles of the Illinois Territory would have become Wisconsin when it became a state in 1848.

University of Illinois soil scientist Ken Olson says Illinois can thank Nathaniel Pope,  the Illinois Territory's congressional delegate, for the additional farmland, lakefront property and Rahm Emanuel. The northern border was moved north to allow the linkage of the Great Lakes shipping route to the Illinois and Mississippi river navigation channels, giving Illinois a valuable shoreline on Lake Michigan and a location for a shipping port hub - which became Chicago. 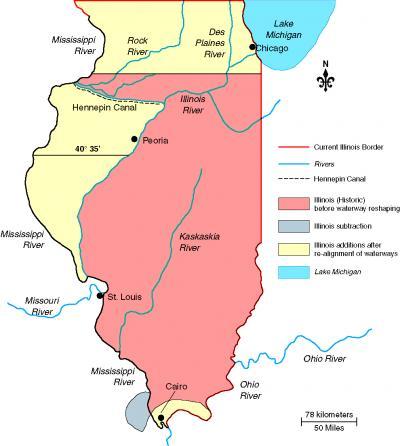 The additions and subtractions to Illinois. The orange area is the net border of Illinois without all the Mississippi and Ohio river re-routing and the decision to provide Illinois with frontage on Lake Michigan and connecting waterways. Courtesy of the Journal of Earth Science and Engineering

"He and his brother, a Kentucky senator, were able to convince Congress to move the proposed border to its present-day location—and that shift in the northern boundary completely altered the fortunes of Wisconsin and Illinois." says Olson. "In addition to the economic benefits of the Chicago port, Illinois acquired 5.5 million acres of very productive soil for farming."

The linkage of the Great Lakes waterway to the Illinois and Mississippi river waterways provided a northern route to move troops and supplies during the Civil War to avoid the contested Ohio River.

Illinois's western border location was determined by an intervention of nature in the Pleistocene Era.

"Numerous glacial advances covered most of Iowa, Missouri, and Illinois," Olson said. "Meltwaters from these glaciers contributed to the realignment of the Mississippi River, which became the western border when Illinois became a state. Before the Pleistocene glacial period, the ancient Mississippi River passed much farther to the east. The land between the Quad Cities Peoria and Alton would not be part of Illinois. So if the Mississippi River had not been realigned by the glaciers, another 7.5 million acres would belong to the states of Missouri and Iowa." Illinois would have lost some of its best soils for corn and soybean production.

Looking southwest, Olson said that seismic activity in the New Madrid area and glacial melt waters approximately 12,000 to 15,000 years ago affected the re-routing of the ancient Mississippi and Ohio rivers to their current locations. He pointed to the modern-day Cache River valley of southern Illinois with its swamps, sloughs, and shallow lakes—remnants of the ancient Ohio River whose confluence with the Mississippi River was once northwest of Cairo.

"Following seismic activity in 1000 A.D., the Cache River valley dropped to its current elevation and was no longer connected to the current Ohio River," Olson said. "The Cache River valley is deeper at a lower elevation, between 320 and 340 feet, than would otherwise be expected in a slow-moving swampy river system, and the presence of thousand-year-old baldcypress trees confirm the natural conversion of river bottomland into swamplands.

"If all of these waterway-related changes had not occurred, the State of Illinois would only have 22 million acres and would be substantially smaller than its current 35 million acres," Olson said. The agricultural lands in Illinois would have been reduced by 40 percent, affecting its agricultural productive capacity, which is an economic engine of the State of Illinois.

Olson concluded. "Chicago and Rockford would be in Wisconsin, Cairo and Metropolis in Kentucky, Quincy in Missouri, and Rock Island, Moline, and Peoria would be in Iowa." The commercial activity from all these cities would not have contributed to Illinois's economic development.

Olson's research suggests that the size and shape of Illinois may have been dramatically different without these natural waterway border changes to the west and south and Nathaniel Pope's intercession on Illinois's northern boundary.