Titan is Saturn's largest moon and the only planetary body outside Venus, Earth and Mars to have fields of wind-blown dunes on its surface.

Saturn and Titan orbit about ten times farther from the sun than Earth. Scientists got their first detailed information about Titan when the Cassini/Huygens orbiter and lander arrived in 2004. The short-lived Huygens lander took photos when it reached the surface and as it was descending through Titan's dense, smoggy atmosphere, which has 1.4 times greater pressure than Earth's. Those images, plus studies using instruments on the Cassini orbiter, revealed that Titan's geological features include mountains, craters, river channels, lakes of ethane, methane and propane - and dunes.

Dunes begin to form when the wind picks up loose particles from the ground and drives them to hop, or saltate, downwind. A key part of understanding dunes is to identify the threshold wind speed that causes dune particles to start to move. Geologists have found threshold speeds for sand and dust under various conditions on Earth, Mars and Venus. But for Titan, with its bizarre conditions, this remained unknown. 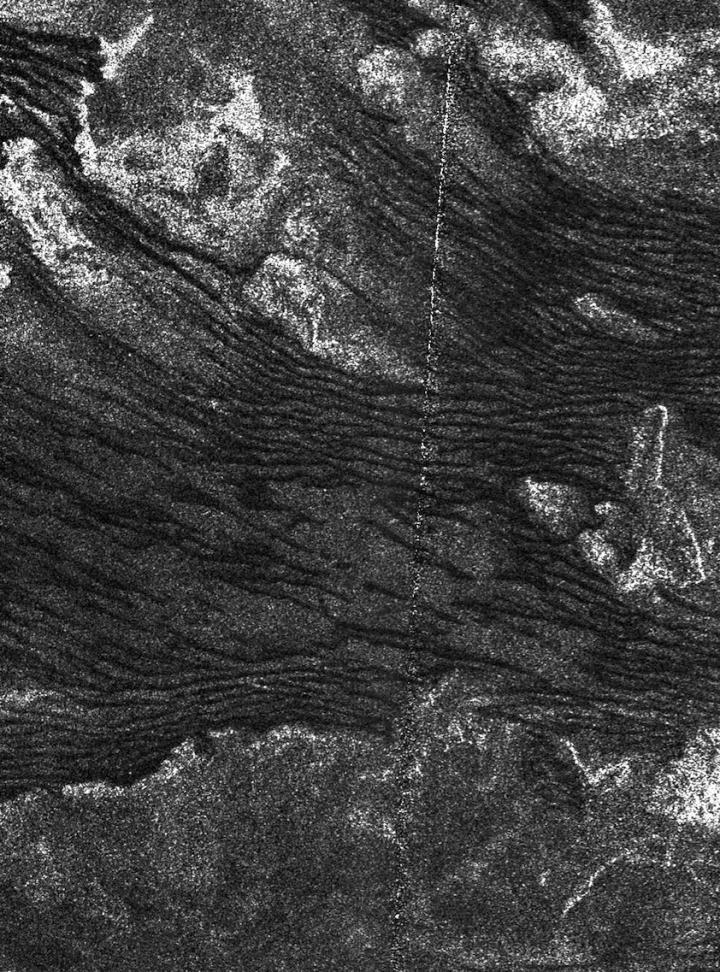 Particles of 'Sand' as Light as Freeze-dried Coffee

On Titan, where the surface temperature is negative 290 degrees Fahrenheit, even "sand" is probably unlike sand on Earth, Mars or Venus. From the Cassini observations and other data, scientists think it is composed of small particles of solid hydrocarbons (or ice wrapped in hydrocarbons), with a density about one-third that of terrestrial sand.

In addition, Titan's gravity is low, roughly one-seventh that on Earth. Combined with the particles' low density, this gives them a weight of only about four percent that of terrestrial sand, or roughly as light as freeze-dried coffee grains.

Given those conditions, how fast must those winds blow to move sand-size particles around on Titan? New experimental results from the high-pressure wind tunnel at Arizona State University's Planetary Aeolian Laboratory find that previous estimates are about 40 percent too low.

The team of scientists led by Devon Burr of the University of Tennessee, Knoxville reported the findings in Nature. James K. Smith, engineer and manager of ASU's Planetary Aeolian Laboratory, is one of the paper's co-authors.

The scientists led by Burr began their study with carefully designed wind tunnel experiments. "We refurbished the high-pressure wind tunnel previously used to study conditions on Venus," Smith explains. To recreate in the tunnel on Earth the wind conditions on Titan, the scientists had to increase the air pressure in the wind tunnel to about 12 times the surface pressure of Earth. And they compensated for the low density of Titan "sand" and the moon's reduced gravity through numerical modeling.

In the end, the Burr team explains, "This simulation reproduces the fundamental physics governing particle motion thresholds on Titan." They add that previous studies, which had extrapolated from wind tunnel experiments designed to mimic conditions on Earth and Mars, produced results that were questionable under Titan's conditions.

The outcome of the wind tunnel experiments show that the previous calculations for wind speeds necessary to lift particles were about 40 to 50 percent too slow. The new experiments show that near the surface of Titan, the most easily moved sand-size particles need winds of at least 3.2 miles per hour (1.4 meters per second) to start moving.

That doesn't sound like much, says Nathan Bridges of the Johns Hopkins University Applied Physics Laboratory, one of the co-authors, "but it makes more sense when you realize this is a dense atmosphere blowing against particles that are very light."

A higher threshold wind speed for making particles move creates an either/or situation in which weak, everyday winds do little or nothing to surface particles, but occasional strong ones readily blow them around and reshape the dunes. The pattern of dunes on Titan shows that despite prevailing winds blowing from the east, the dunes appear shaped by winds from the west, which occur more rarely. Thus, the new work indicates that Titan's dunes are seldom stirred into motion - only whenever conditions produce strong westerly winds.

For simplicity, the wind-tunnel modeling ignored some factors, among them whether Titan dune particles are sticky. If they are, the paper's scientists note, then it will take yet-stronger winds to get the particles moving, and the contrasts will be even greater between the normal east wind pattern and the stronger west winds that shape the dunes.