News Staff
Astronomers at the Hubble Space Telescope believe they have found the most distant object ever seen in the universe, 13.2 billion light years away, some 3% of the age of universe, making it roughly 150 million light years more distant than the previous record holder, says the report in Nature.

This newly found object, named UDFj-39546284, is a compact galaxy made of blue stars that existed only 480 million years after the Big Bang - and it's tiny.   Over one hundred such mini galaxies would be needed to make up our Milky Way.

Previous searches had found 47 galaxies at somewhat later times, when the universe was about 650 million years old. The rate of star birth therefore increased by about ten times in the interval from 480 million years to 650 million years. "This is an astonishing increase in such a short period, happening in just 1% of the age of the universe," says co-author Ivo Labbé of the Carnegie Observatories.

Astronomers don't know exactly when the first stars appeared in the universe, but every step back in time takes them deeper into the early universe's "formative years" when stars and galaxies were just beginning to emerge in the aftermath of the Big Bang. 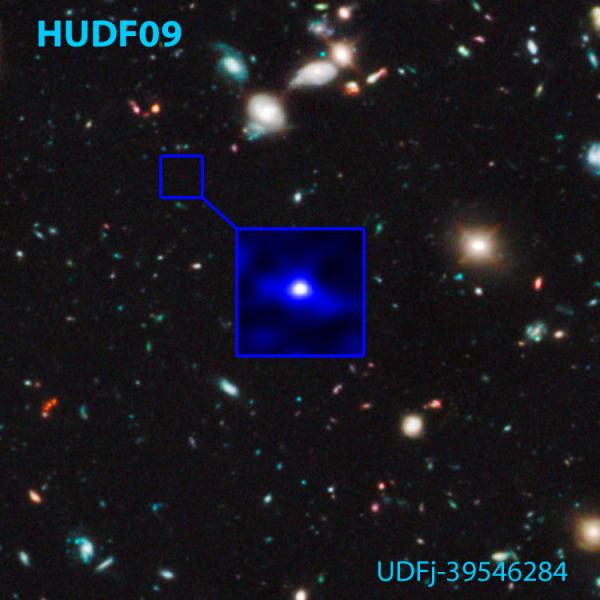 This image of the Hubble Ultra-Deep Field is a small part of the deepest infrared image ever taken of the universe. The small blue box outlines the area where astronomers found what may be the most distant galaxy ever seen, 13.2 billion light-years away, meaning its light was emitted just 480 million years after the Big Bang. It is small and very faint and is shown separately in the larger box. The galaxy is shown as blue because it emitted very blue light due to its high rate of star birth, although by the time the light reached Hubble it had been stretched into the infrared by the expansion of space, giving it a redshift value of about 10. Its official name is UDFj-39546284, but astronomers refer to it as the redshift 10 galaxy candidate. Credit: NASA, ESA, Garth Illingworth (University of California, Santa Cruz) and Rychard Bouwens (University of California, Santa Cruz and Leiden University) and the HUDF09 Team.

"We're moving into a regime where there are big changes afoot. And what it tells us is that if we go back another couple hundred million years toward the Big Bang we'll see absolutely dramatic things happening. That will be the time where the first galaxies really are starting to get built up," says Garth Illingworth of the University of California at Santa Cruz.

The even more distant proto galaxies will require the infrared vision of NASA's James Webb Space Telescope, which is the successor to Hubble, and next-generation ground-based telescopes, such as the Giant Magellan Telescope. These new facilities, planned for later this decade, will provide confirming spectroscopic measurements of the tremendous distance of the object being reported today.

After over a year of detailed analysis, the galaxy was positively identified in the Hubble Ultra Deep Field – Infrared (HUDF-IR) data taken in the late summer of both 2009 and 2010. These observations were made with the Wide Field Planetary Camera 3 (WFPC3) starting just a few months after it was installed into the Hubble Space Telescope in May of 2009, during the last NASA space shuttle servicing mission to Hubble.

The object appears as a faint dot of starlight in the Hubble exposures. It is too young and too small to have the familiar spiral shape that is characteristic of galaxies in the local universe, such as the Milky Way. Though individual stars can't be resolved by Hubble, the evidence suggests that this is a compact galaxy of hot stars that first started to form over 100 to 200 million years earlier in a pocket of dark matter.

The proto galaxy is only visible at the farthest infrared wavelengths observable by Hubble. This means that the expansion of the universe has stretched its light farther that any other galaxy previously identified in the HUDF-IR, to the very limit of Hubble's capabilities.

Astronomers plumb the depths of the universe by measuring how much the light from an object has been stretched by the expansion of space. This is called redshift value or "z." Before Hubble was launched, astronomers could only see galaxies out to a z approximately 1, corresponding to 6 billion years after the Big Bang. The Hubble Deep Field taken in 1995 leapfrogged to z=4, or roughly 90 percent of the way back to the beginning of time. The new Advanced Camera and the Hubble Ultra Deep Field pushed back the limit to z~6 after the 2002 servicing mission. Hubble's first infrared camera, the Near Infrared Camera and Multi Object Spectrometer reached out to z=7. The WFC3/IR reached back to z~8, and now plausibly has penetrated for the first time to z=10 (about 500 million years after the Big Bang). The Webb Space Telescope is expected to leapfrog to z~15, and possibly beyond. The very first stars may have formed between z of 30 to 15, or 100 to 250 million years post Big Bang.

The hypothesized hierarchical growth of galaxies—from stellar clumps to majestic spirals—didn't become evident until the Hubble Space Telescope deep field exposures. The first 500 million years of the universe's existence, from a z of 1000 to 10 is now the missing chapter in the hierarchical growth of galaxies. It's not clear how the universe assembled structure out of a darkening, cooling fireball of the Big Bang. As with a developing embryo, astronomers know there must have been an early period of rapid changes that would set the initial conditions to make the universe of galaxies that exist today. Astronomers eagerly await the new space and ground-based telescopes to find out!
News Articles
More Articles All Articles
About