Researchers have built a simulation to show how cancerous tumors manipulate blood-vessel growth for their own benefit.

Like all cells, those in tumors need access to the body's fine network of blood vessels to bring them oxygen and carry away waste. Tumors have learned to game the process called angiogenesis in which new vessels sprout from existing ones, like branches from a tree.

But some details have been hidden until now. 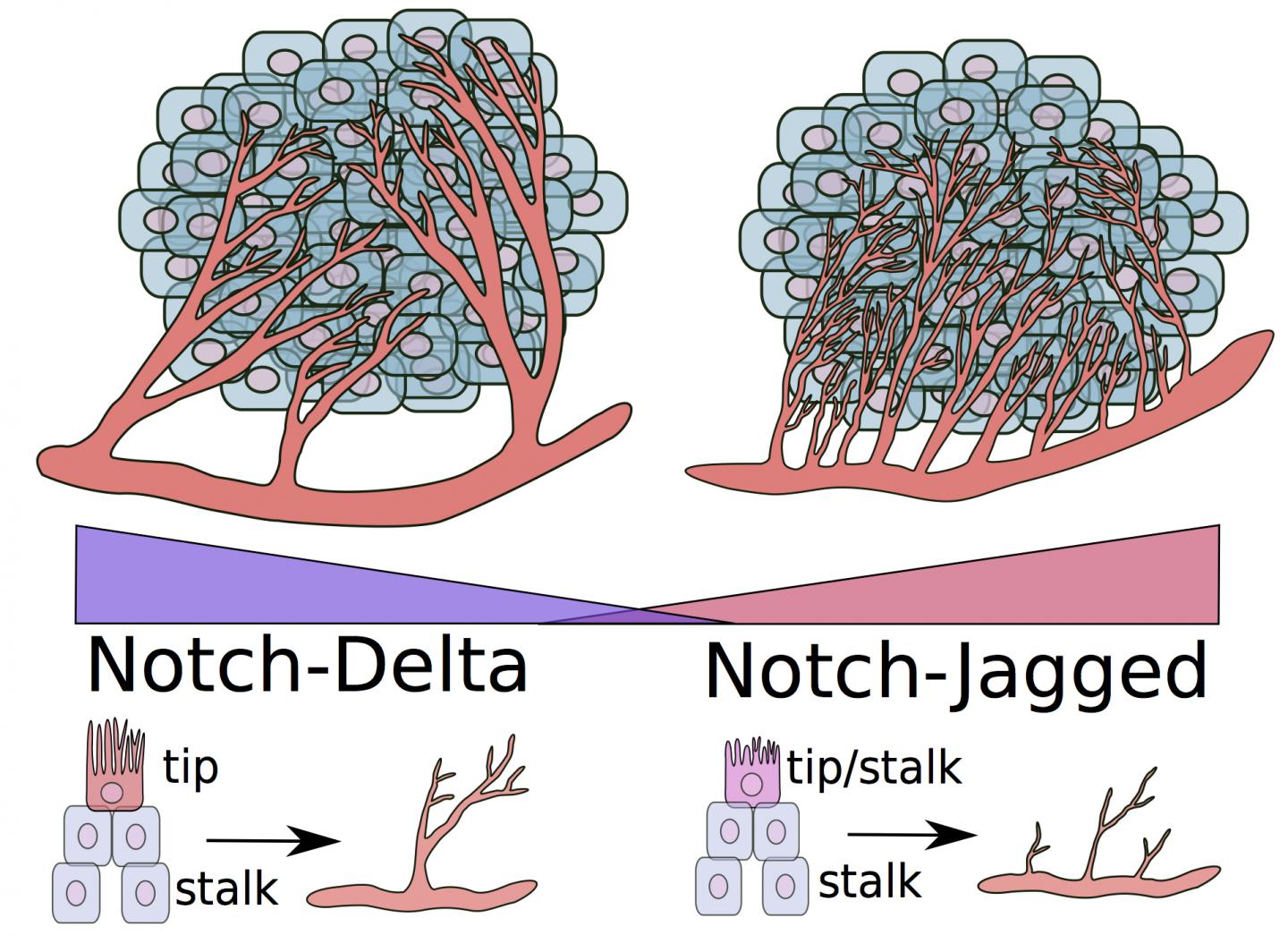 New research at Rice University shows how tumors create chaos in the development of neighboring blood vessels, causing them to grow too quickly and not form properly. Credit: Marcelo Boareto/Rice University

The ability to stop tumors through anti-angiogenesis is one goal of cancer therapy. The new work by scientists at Rice University's Center for Theoretical Biological Physics should help researchers quickly test strategies with sophisticated computer models.

The team led by José Onuchic and Eshel Ben-Jacob created a detailed model of how proteins involved in angiogenesis communicate with each other and how tumors take charge of the protein signaling chain that controls vessel growth.

A key finding in the work detailed this week shows that ligands known as "jagged" play a major role in the chaotic vessel growth observed around tumors.

In normal growth, an endothelial cell sprouts from an existing vessel as a tip, while others that follow the tip cell become the stalk cells that ultimately form vessel walls. The cell-to-cell notch signaling pathway directs the endothelial cell's decision to become a tip or stalk.

Notch receptors are proteins that bind with delta ligand or jagged ligand molecules produced by cells. How they interact determines the cell's fate. When notch and delta bind, they prompt a few cells to be tips and adjacent ones to be stalks; how this happens is the subject of an earlier study at Rice.

But the role of jagged ligands has emerged in the new model. Because jagged is overexpressed in the tumor environment, notch-jagged binding overpowers notch-delta and results in a new kind of cell, a tip/stalk hybrid. While such cells can still form new vessels, these vessels rarely mature.

"You get blood vessels that send out many branches, but very few of them are as well-developed as seen during normal angiogenesis," said Mohit Kumar Jolly, a Rice bioengineering graduate student and co-author of the paper.

"High levels of jagged in the environment can trigger the formation of blood vessels that are useful to the tumor: fast-developing, leaky and spread chaotically all over the tumor mass," added lead author Marcelo Boareto, a former visiting scholar at Rice and now a postdoctoral fellow at the Swiss Federal Institute of Technology, Zurich.

"Tumors don't have to wait for the vessels to develop," Onuchic said. "They take advantage of the leakiness of the structure."

The notch-delta pathway has been heavily studied and is the target of many anti-angiogenesis drugs now in use, according to the researchers. "We wondered exactly what notch-jagged signaling does that is not done in notch-delta signaling," Boareto said. "We find that when the cells communicate mostly via jagged, we see a new kind of cell that is not exactly tip and not exactly stalk, but somewhere in between.

"This compromised cell is the major difference between normal and tumor angiogenesis and suggests that if notch-jagged signaling can be somehow suppressed without affecting notch-delta, we can probably disrupt tumor angiogenesis," he said.

Onuchic said most current anti-angiogenesis therapies target notch signaling as a whole. "This has many side effects, and it does not specifically treat the tumor angiogenesis," he said.

He noted the model also takes into account the effect of vascular endothelial growth factor (VEGF), a protein that triggers angiogenesis and is overexpressed by tumor cells. "It is very interesting how the tumor hijacks this important mechanism, which is needed for the development of a functional vessel, and amplifies it to generate pathological angiogenesis that leads to uncontrolled growth," he said.