Are umpires biased? There has been sociological woo produced trying to prove they are racist in baseball but a paper has found that if a cricket team has home umpires, some bias does get introduced, at least in Test cricket, the longest form of the sport .

The introduction of neutral umpires in Test cricket led to a drop in the number of Leg Before Wicket (LBW - think the offsides rule in soccer for how arcane and subjective it once was) decisions going in favor of home teams, according to economists writing in the Journal of the Royal Statistical Society, and it validates that neutral umpiring is still needed in Test matches even with the Decision Review System (DRS). 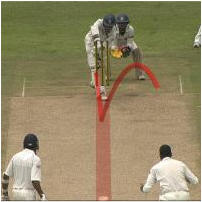 Sri Lankan batsman Malinda Warnapura survives an lbw appeal not once but twice as Indian spinner Harbhajan Singh creates test history when he asks for the umpire's not out decision to be reviewed by the third umpire. Photo: Animation Research

Economists Dr. Abhinav Sacheti and Professor David Paton from Nottingham University Business School and Dr. Ian Gregory-Smith from the University of Sheffield analyzed Leg Before Wicket decisions in exactly 1,000 Test matches that took place between 1986 and 2012 -- nearly half of Test matches ever played in the history of cricket.

The economists found clear evidence of fewer decisions in favor of home teams with neutral umpires.

Sacheti, lead author of the paper, said, "Our results suggest that when two home umpires officiated in Test matches, away teams were likely to suffer on average 16 per cent more LBW decisions than home teams. When the ICC introduced the one neutral umpire policy, this advantage to home teams receded to 10 per cent.

"When two neutral umpires were required in every Test match, this advantage to home teams disappeared. This result holds even when we control for the quality of teams, the ground where the match was played and so on."

The economists found that the bias by home umpires in favor of home teams had been particularly strong in Test matches played in Australia, India, Pakistan and Sri Lanka.

A possible explanation for the finding is that home umpires were unduly influenced by pressure from local crowds and, indeed, a similar bias towards home teams has been noted amongst football referees. In fact, the home bias in Test matches was found to be strongest towards the end of the game, when crowds are often at their smallest. Many cricket fans have long claimed that home umpires are biased towards their own team and the findings of this latest research appear to provide support for such claims.

Professor Paton however offered a word of caution. "The results do not necessarily mean that umpires deliberately favored their home teams -- the bias may have been unconscious. The fact remains though that introducing neutral umpires seemed to get rid of the problem."

Recently, some commentators have suggested that the introduction of the Decision Review System (DRS) eliminates the need for neutral umpires. Dr. Gregory-Smith agreed that new technology can help to improve decision-making but warned: "Whatever the reasons behind the bias, our results suggest that cricketing authorities should be very cautious before returning to a system whereby umpires can officiate in Test matches involving their own country."