News Staff
Researchers have tested a range of neuroprosthetic devices, from wheelchairs to robots to advanced limbs, that work with their users to intelligently perform tasks.

They work by decoding brain signals to determine the actions their users want to take, and then use advanced robotics to do the work of the spinal cord in orchestrating the movements. The use of shared control - new to neuroprostheses - "empowers users to perform complex tasks," says José del R. Millán, who presented the new work at the Cognitive Neuroscience Society (CNS) conference in San Francisco today. 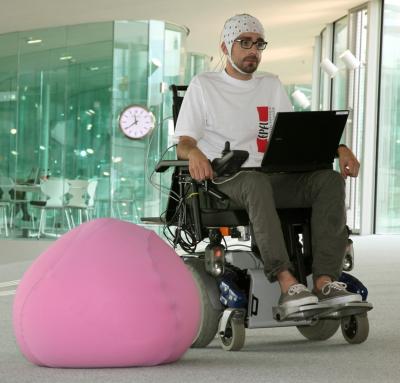 Users can drive this brain-controlled wheelchair reliably and safely over long periods of time thanks to the incorporation of 'shared control' techniques in intelligent neuroprostheses. Credit: José del R. Millán

"The prostheses and robots that our BCIs control are intelligent, as they can interpret many low-level details that are not necessarily coded in the mental commands," he says. Importantly, they also work autonomously if the users do not want to change their behavior. This function mirrors how our deep brain areas, spinal cord, and musculoskeletal system work together in many routine tasks, allowing our bodies to do simple tasks while we focus our attention elsewhere.

In his and colleagues' latest work, they tested a variety of brain-controlled devices on people with motor disabilities, in some case quite severe. The participants successfully completed tasks ranging from writing to navigation at similar levels of performance as healthy control groups.

The individuals operated the devices by voluntarily and spontaneously modulating the electrical brain activity, called EEGs, to deliver commands. EEGs have the benefit that they can be recorded non-invasively through probes on the scalp, rather than requiring surgery or sophisticated machinery. "It also provides a global picture of our brain patterns, what is necessary to decode all the variety of neural correlates we want to exploit," Millán explains.

The participants needed a relatively short training period of no more than 9 sessions before being able to operate the devices. And those using telepresence robots were able to successfully navigate through environments they had never visited. Key to their success, Millán says, was the concept of shared control - using robots' sensory capabilities to interpret the users' command in context.

The BCI processes users' intentions and decision-making mainly from the cerebral cortex . But, Millán notes that many elements of skilled movements are handled in the brainstem and spinal cord. By designing the intelligent device to control the lower-level movements in concert with the higher-level brain activity from the BCI, the neuroprostheses come closer to natural motor control. "We aim to interact with these neuroprostheses as if they were our new body, using the very same neural signals and principles that control our muscles," Millán says.

As an example of the new types of neuroprostheses, Millán points to a brain-controlled wheelchair he and colleagues designed and published a paper about last year. Its users can drive it reliably and safely over long periods of time as a result of the shared control system reducing the cognitive workload. The wheelchairs are currently in the evaluation phase, to make sure that they will work in daily life conditions for a large number of people with motor disabilities.

Two of the biggest challenges for neuroprosthetics are finding new physical interfaces in addition to EEG that can operate permanently and over long periods of time, as well as providing rich sensory feedback. "This sensory information will make users feel the neuroprosthesis and the environment, what is essential to promote user's agency and ownership of the prosthesis," Millán says.

"The third major challenge is the one at the core of cognitive neuroscience: We must decode and integrate in the prosthetic control loop information about perceptual cognitive processes of the user that are crucial for volitional interaction," he says. These processes include awareness to errors made by the device, anticipation of critical decision points, and lapses of attention.

"Future neuroprostheses -- robots and exoskeletons controlled via a BCI -- will be tightly coupled with the user in such a way that the resulting system can replace and restore impaired limb functions because it will be controlled by the same neural signals as their natural counterparts," Millán says. "This is no longer science fiction; the questions now are which are the key components to guarantee reliability and long-term operation of neuroprostheses, and when they will part of the clinical portfolio available to motor-disabled people."
News Articles
More Articles All Articles
About