Because detectable mass only makes up about 5 percent of the universe - and the universe is expanding faster now than in the past - a rethink of mass and gravity has been required. The umbrella term for this mass that must exist, but can't be detected, is "dark matter." Don't worry if that definition is vague, no one knows any more than that.

Dark matter can be inferred by gravitational effects - and things like antimatter and baryonic clouds can be excluded - and so hundreds of explanations have been created for it. A new one by Mikhail Medvedev, professor of physics and astronomy at the University of Kansas is called "flavor-mixed multicomponent dark matter."

Writing in Physical Review Letters, he posits that his model of dark matter can be built using the behavior of elementary particles that have been observed - or at least hypothesized. That last part is a red flag. According to today's prevalent Standard Model theory of particle physics, elementary particles — categorized as varieties of quarks, leptons and gauge bosons — are the building blocks of an atom. The properties, or "flavors," of quarks and leptons are prone to change back and forth, because they can combine with each other in a phenomenon called flavor-mixing. 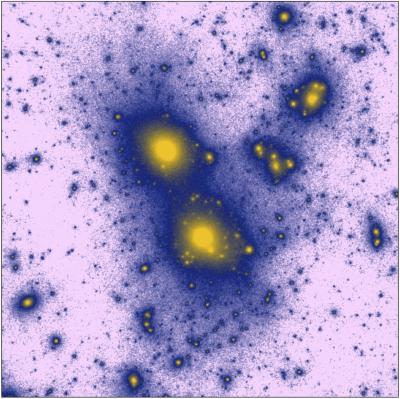 The distribution of dark matter in the universe if the two-component flavor-mixed dark matter paradigm is real. Credit: University of Kansas / KU News Service

"In everyday life we've become used to the fact that each and every particle or an atom has a certain mass," Medvedev said. "A flavor-mixed particle is weird — it has several masses simultaneously — and this leads to fascinating and unusual effects."

Medvedev compared flavor-mixing to white light that contains several colors and can generate a rainbow.

Medvedev said that dark matter candidates are also theorized to be flavor-mixed — such as neutralinos, axions and sterile neutrinos.

"These are, in fact, the most preferred candidates people speak about all the time," Medvedev said. "Previously we discovered that flavor-mixed particles can 'quantum evaporate' from a gravitational well if they are 'shaken' — meaning they collide with another particle. That's a remarkable result, as if a spacecraft made of flavor-mixed matter and hauled along a bumpy road puts itself into space without a rocket or any other means or effort by us."

"Each simulation utilized over a 1,000 cores and ran for a week or so," he said. "This yearlong project consumed about 2 million computer hours in total, which is equal to 230 years."

Medvedev said that dark matter may interact with normal matter extremely weakly, which is why it hasn't been revealed already in numerous ongoing direct detection experiments around the world. So physicists have devised a working model of completely collision-less (noninteracting), cold (that is, having very low thermal velocities) dark matter with a cosmological constant (the perplexing energy density found in the void of outer space), which they term the "Lambda-CDM model." But the model has hasn't always agreed with observational data, until Medvedev's paper solved the theory's long-standing and troublesome puzzles.

"Our results demonstrated that the flavor-mixed, two-component dark matter model resolved all the most pressing Lambda-CDM problems simultaneously," said the KU researcher.