News Staff
The most distant galaxy cluster yet, known as JKCS041, has been discovered by combining data from NASA's Chandra X-ray Observatory and optical and infrared telescopes at the United Kingdom Infrared Telescope (UKIRT), the Canada-France-Hawaii telescope in Hawaii and NASA's Spitzer Space Telescope. The JKCS041 cluster is located about 10.2 billion light years away, and is observed as it was when the Universe was only about a quarter of its present age.

Galaxy clusters are the largest gravitationally bound objects in the Universe. Finding such a large structure at this very early epoch can reveal important information about how the Universe evolved at this crucial stage. 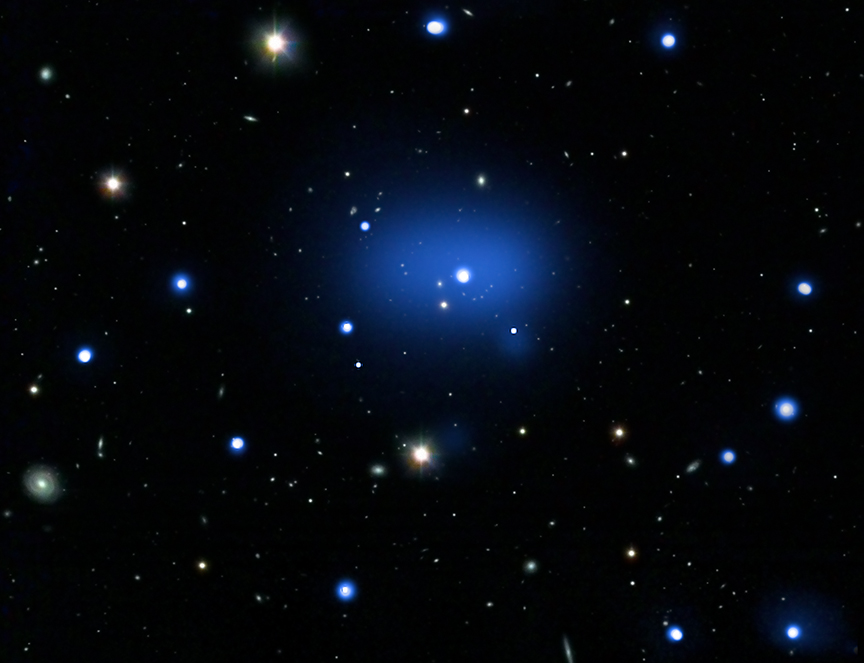 JKCS041 is observed as it was when the Universe was just one quarter of its current age. X-rays from Chandra are displayed here as the diffuse blue region, while the individual galaxies in the cluster are seen in white in the VLT's optical data, embedded in the X-ray emission.  JKCS041 was originally detected in 2006 with infrared observations from the United Kingdom Infrared Telescope (UKIRT).  Color code: X-ray (blue); Optical (Red, Green, Cyan).   Credit: X-ray: NASA/CXC/INAF/S.Andreon et al Optical: DSS; ESO/VLT

JKCS041 is found at the cusp of when scientists think galaxy clusters can exist in the early Universe based on how long it should take for them to assemble. Therefore, studying its characteristics, such as composition, mass, and temperature, will reveal more about how the Universe took shape.

"This object is close to the distance limit expected for a galaxy cluster," said Stefano Andreon of the National Institute for Astrophysics (INAF) in Milan, Italy. "We don't think gravity can work fast enough to make galaxy clusters much earlier."

Distant galaxy clusters are often detected first with optical and infrared observations that reveal their component galaxies dominated by old, red stars. JKCS041 was originally detected in 2006 in a survey from the United Kingdom Infrared Telescope (UKIRT). The distance to the cluster was then determined from optical and infrared observations from UKIRT, the Canada-France-Hawaii telescope in Hawaii and NASA's Spitzer Space Telescope. Infrared observations are important because the optical light from the galaxies at large distances is shifted into infrared wavelengths because of the expansion of the universe.

The Chandra data were the final piece of evidence as they showed that JKCS041 was, indeed, a genuine galaxy cluster. The extended X-ray emission seen by Chandra shows that hot gas has been detected between the galaxies, as expected for a true galaxy cluster rather than one that has been caught in the act of forming.

Also, without the X-ray observations, the possibility remained that this object could have been a blend of different groups of galaxies along the line of sight, or a filament, a long stream of galaxies and gas, viewed front on. The mass and temperature of the hot gas detected estimated from the Chandra observations rule out both of those alternatives.

The extent and shape of the X-ray emission, along with the lack of a central radio source argue against the possibility that the X-ray emission is caused by scattering of cosmic microwave background light by particles emitting radio waves.

It is not yet possible, with the detection of just one extremely distant galaxy cluster, to test cosmological models, but searches are underway to find other galaxy clusters at extreme distances.

"This discovery is exciting because it is like finding a Tyrannosaurus Rex fossil that is much older than any other known," said co-author Ben Maughan, from the University of Bristol in the United Kingdom. "One fossil might just fit in with our understanding of dinosaurs, but if you found many more, you would have to start rethinking how dinosaurs evolved. The same is true for galaxy clusters and our understanding of cosmology."

"What's exciting about this discovery is the astrophysics that can be done with detailed follow-up studies," said Andreon.

Among the questions scientists hope to address by further studying JKCS041 are: What is the build-up of elements (such as iron) like in such a young object? Are there signs that the cluster is still forming? Do the temperature and X-ray brightness of such a distant cluster relate to its mass in the same simple way as they do for nearby clusters?

The paper describing the results on JKCS041 from Andreon and his colleagues will appear in an upcoming issue of Astronomy and Astrophysics.
News Articles
More Articles All Articles
About