News Staff
Think it takes James Webb Space Telescope money-pit type funding to do (or someday do) astronomy these days?

Not so, some astronomers get it done with a lens equivalent to a digital camera. As the saying goes, it's not the size of your aperture, it's the vigor of your numerical analysis that counts.

The KELT North telescope in southern Arizona has a tiny lens - really tiny.  But it has revealed the existence of two very unusual faraway planets in a big way, according to Ohio State University doctoral student Thomas Beatty and Vanderbilt University research scientist Robert Siverd, who detailed their discoveries for the KELT-North team at the American Astronomical Society national meeting in Anchorage.

One planet is a massive, puffed-up oddity that could change ideas of how solar systems evolve. The other orbits a very bright star, and will allow astronomers to make detailed measurements of the atmospheres of these bizarre worlds.

One planet is located in the constellation Andromeda. Dubbed KELT-1b, it is so massive that it may better be described as a 'failed star' rather than a planet. A super hot, super dense ball of metallic hydrogen, KELT-1b is located so close to its star that it whips through an entire "yearly" orbit in a little over a day - all the while being blasted by six thousand times the radiation Earth receives from the sun.

What's more, the planet appears to have been jostled in the past by a previously unknown distant binary companion star that is orbiting the KELT-1 solar system.  In short, the planet "resets the bar for 'weird,'" said Scott Gaudi, an associate professor of astronomy at Ohio State and a member of the research team. 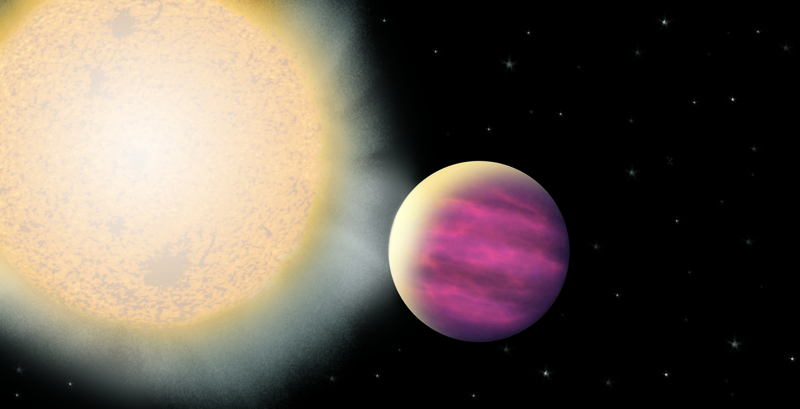 Artistic rendering of planet KELT-1b, which resides so close to its star that it completes a "yearly" orbit in a mere 30 hours. Credit: Julie Turner, Vanderbilt University.

The other planet, KELT-2Ab, is located in the constellation Auriga, and is typical of many previously discovered extrasolar planets in that it much resembles our own Jupiter. But its parent star is very bright - so bright that astronomers believe that they will be able to directly observe KELT-2Ab's atmosphere by studying the starlight that shines through it and the infrared heat that radiates from it—using telescopes located not only in space, but also on the ground.

"Normally, we would need a space telescope to do all that, but in this case the host star is so bright that we can make many of these measurements from the ground," Beatty said.

KELT is short for "Kilodegree Extremely Little Telescope." Astronomers at Ohio State and Vanderbilt University jointly operate KELT North and its twin, KELT South, in order to fill a large gap in the available technologies for finding extrasolar planets.

Other telescopes were designed to look at very faint stars in tiny sections of the sky, and at very high resolution, Beatty explained. The KELTs, in contrast, look at millions of very bright stars at once, over broad sections of sky, and at low resolution.

"Our stars are so bright, these 'more powerful' telescopes can't even look at them," Beatty said.

The KELT team scans those bright stars, and watches to see if the starlight dims just a little - an indication that a planet has crossed in front of the star. The technique is called the "transit method," and takes advantage of situations such as the recent transit of Venus across the face of the sun in our own solar system.

It's a low-cost means of planet-hunting, using mostly off-the-shelf technology; Whereas a traditional astronomical telescope costs millions of dollars to build, the hardware for a KELT telescope runs less than $75,000.

Joshua Pepper, a research assistant professor and fellow of the Vanderbilt Initiative in Data-Intensive Astrophysics, built KELT North when he was a doctoral student at Ohio State. Study co-author Robert Siverd further developed and enhanced the instrument before he went to Vanderbilt. There, they work with Keivan Stassun, professor of physics and astronomy, who hired them to build KELT South.

"Exoplanets like KELT-1b and KELT-2Ab that pass directly in front of very bright stars are extremely important, but extremely rare, because there just aren't that many very bright stars in the sky," said Stassun. "The KELT-North and KELT-South partnership gives us the advantage of hunting for these rare gems from both hemispheres, doubling the hunting grounds."

After KELT detected these new astronomical objects, a collaboration of KELT with astronomers at Harvard, Swarthmore, the University of Louisville, Las Cumbres Observatory, and even amateur astronomers helped to confirm the identities of these objects with additional observations. According to Pepper, "The KELT project has benefited from the dedication of a great team of astronomers, and represents an enormous scientific return on a relatively small investment."

The more typical of the two planets, KELT-2Ab, is 30 percent larger than Jupiter with 50 percent more mass. It resides in a binary system called HD 42176, with one star that is slightly bigger than our sun, and another star that is slightly smaller. KELT-2Ab orbits the bigger star, which is bright enough to be seen from Earth with binoculars. That's why astronomers hope to be able measure the starlight that passes through KELT-2Ab's atmosphere when the star returns to KELT North's field of view this November.

KELT-1b, in contrast, is one of the most bizarre transiting companions ever detected. It orbits a star not unlike our sun, but the similarity to our solar system ends there.

The planet is slightly larger than Jupiter, but contains 27 times the mass. Thus, it qualifies as a 'failed star,' or "brown dwarf." Although it is made primarily of hydrogen, it is so massive and compressed that its density matches that of the densest naturally occurring element on Earth: osmium - a shiny, bluish metal found in platinum ore that is approximately twice as dense as lead.

Because it orbits its host star once every 30 hours, a solar "year" on KELT-1b passes in a little more than one Earth day. And because it orbits so closely, it is blasted with 6,000 times the amount of stellar radiation than we are exposed to on Earth. Its surface temperature is likely above 4,000 degrees Fahrenheit (about 2,200 degrees Celsius).

By comparison, the planet Mercury orbits our sun once every 68 days, and the hottest temperature on the surface reaches only 800 degrees Fahrenheit (more than 425 degrees Celsius). Likely in response to the intense radiation, KELT-1b has inflated to a larger size than astronomers would normally predict.

"This is the first definitively 'inflated' brown dwarf found, and exactly how this happened is a complete mystery that should keep theorists busy for a while," Gaudi said. KELT-1b is a strange world, indeed. If you could stand on the surface, the "sun" would take up one quarter of the sky overhead. Fewer than 1 percent of the extrasolar planets ever discovered have been both extremely massive and extremely close to their host stars.

"This is a great system for studying orbital dynamics," said Siverd, who is the lead investigator on the KELT-1 discovery. "It has the strongest tides of any brown dwarf system found so far."

Gaudi said that astronomers are beginning to suspect that something unusual happens during the evolution of such solar systems that drives massive planets into these kinds of close encounters. The presence of a stellar sibling orbiting both of the newly discovered solar systems may be a "smoking gun" clue that past interactions between the planets and these distant siblings is an important part of that process.

"We think they are born at much larger, colder distances," he said, "and then like retirees moving to Florida, they move to warmer climes as they get older."
News Articles
More Articles All Articles
About