News Staff
The leading theory of what causes ice ages around the world -- changes in the way the Earth orbits the sun- has been cast into doubt by a new study.

The study raises questions about the Milankovitch theory of climate, which says the expansion and contraction of Northern Hemisphere continental ice sheets are influenced by cyclic fluctuations in solar radiation intensity due to wobbles in the Earth's orbit; those orbital fluctuations should have an opposite effect on Southern Hemisphere glaciers.

The researchers writing in Geology found that glacier movement in the Southern Hemisphere is influenced primarily by sea surface temperature and atmospheric carbon dioxide rather than changes in the Earth's orbit, which are thought to drive the advance and retreat of ice sheets in the Northern Hemisphere. 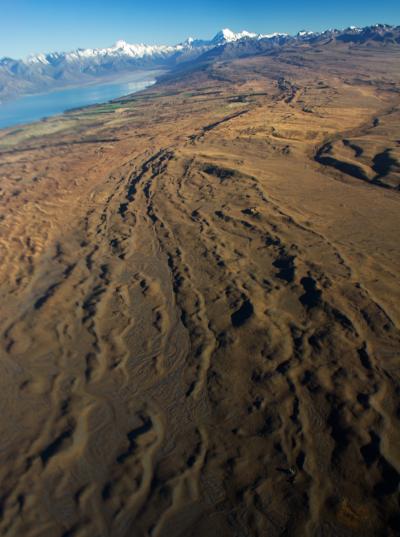 "Records of past climatic changes are the only reason scientists are able to predict how the world will change in the future due to warming. The more we understand about the cause of large climatic changes and how the cooling or warming signals travel around the world, the better we can predict and adapt to future changes," says lead author Alice Doughty, a glacial geologist at Dartmouth College who studies New Zealand mountain glaciers to understand what causes large-scale global climatic change such as ice ages. "Our results point to the importance of feedbacks -- a reaction within the climate system that can amplify the initial climate change, such as cool temperatures leading to larger ice sheets, which reflect more sunlight, which cools the planet further. The more we know about the magnitude and rates of these changes and the better we can explain these connections, the more robust climate models can be in predicting future change."

The researchers used detailed mapping and beryllium-10 surface exposure dating of ice-age moraines - or rocks deposited when glaciers move -- in New Zealand's Southern Alps, where the glaciers were much bigger in the past. The dating method measures beryllium-10, a nuclide produced in rocks when they are struck by cosmic rays. The researchers identified at least seven episodes of maximum glacier expansion during the last ice age, and they also dated the ages of four sequential moraine ridges.

The results showed that New Zealand glaciers were large at the same time that large ice sheets covered Scandinavia and Canada during the last ice age about 20,000 years ago. This makes sense in that the whole world was cold at the same time, but the Milankovitch theory should have opposite effects for the Northern and Southern Hemispheres, and thus cannot explain the synchronous advance of glaciers around the globe.

Previous studies have shown that Chilean glaciers in the southern Andes also have been large at the same time as Northern Hemisphere ice sheets.

The ages of the four New Zealand ridges - about 35,500; 27,170; 20,270; and 18,290 years old -- instead align with times of cooler sea surface temperatures off the coast of New Zealand based on offshore marine sediment cores. The timing of the Northern Hemisphere's ice ages and large ice sheets is still paced by how Earth orbits the Sun, but how the cooling and warming signals are transferred around the world has not been fully explained, although ocean currents (flow direction, speed and temperature) play a significant role.
News Articles
More Articles All Articles
About