When anti-science activists set out to drive astronomy from the state of Arizona by trumping up an environmental hazard, they were failing to prevent a problem that would creep across many places that don't want space science in their neighborhood - light pollution.

Today, in metropolitan areas across the world, the Milky Way, the cluster of stars that has dominated the night sky and human imaginations for millenia is a faded memory to one third of humanity, according to a new global atlas of light pollution. Ironically, environmentalists who created light pollution by blocking astronomy projects in the mainland United States (and now Hawaii also) are partially responsible for why the Milky Way is not visible to 80 percent of Americans. Other environmentalists advocate more urban living to reduce the carbon footprint of while a greater population accounts for much of the luminous fog that swamps the stars and constellations of the night sky.

"We've got whole generations of people in the United States who have never seen the Milky Way," said Chris Elvidge, a scientist with NOAA's National Centers for Environmental Information in Boulder, Colorado. "It's a big part of our connection to the cosmos -- and it's been lost."

We've seen this issue in the past. When people become disenfranchised from science, they lose interest in funding it. Environmentalists have begun to realize that, and have stopped their war to keep the public off of national parks, while some fringe groups are turning their cultural guns on aquariums. 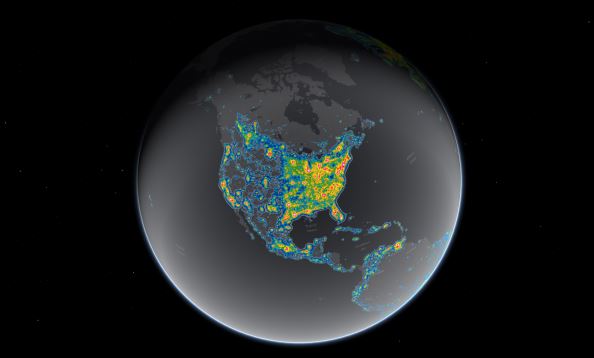 Light pollution now blots out the Milky Way for eight in 10 Americans. Bright areas in this map show where the sky glow from artificial lighting blots out the stars and constellations. An international team of researchers has released the new World Atlas of Artificial Sky Brightness, in a paper published in Science Advances today. Credit: Falchi et al, Science Advances; Jakob Grothe/National Park Service, Matthew Price/CIRES/CU-Boulder.

Elvidge, along with Kimberly Baugh of the Cooperative Institute for Research in Environmental Sciences at the University of Colorado Boulder, is part of a team that just updated a global atlas of light pollution published today in Science Advances. The atlas takes advantage of low-light imaging now available from the NOAA/NASA Suomi National Polar-orbiting Partnership satellite, calibrated by thousands of ground observations.

Light pollution is most extensive in countries like Singapore, Italy and South Korea, while Canada and Australia retain the most dark sky. In western Europe, only small areas of night sky remain relatively undiminished, mainly in Scotland, Sweden and Norway. Despite the vast open spaces of the American west, almost half of the U.S. experiences light-polluted nights.

"In the U.S., some of our national parks are just about the last refuge of darkness - places like Yellowstone and the desert southwest," said co-author Dan Duriscoe of the National Park Service. "We're lucky to have a lot of public land that provides a buffer from large cities."