Necessity may be the mother of invention, at least if war is a necessity. And perhaps it is.

In the early days of humanity, survival was a combination of hardiness, keen engineering and intelligence - and nothing spurred on technological progress and vast social changes like the need to work together to kill other people, according to a new paper in Journal of the Royal Society Interface.

How humans evolved high intelligence, required for complex collaborative activities, despite the various costs of having a big brain has long puzzled evolutionary biologists. The human brain represents 2 percent of the body's weight but is about 20 percent of the energy demands.

Why and how did the human brain evolve to become so large and complex? Then there is the sociological aspect; how did humans evolve strong innate preferences for cooperative behavior, as cooperative behavior is vulnerable to exploitation by cheaters and "free-riders" who don't 'pull their weight' and so undermine the effectiveness of the group's collaborative effort, something scientists call "the collective action problem."  The ancient problem of liberalism versus conservatism, prehistoric-style, was how liberals survived when nature is so libertarian. 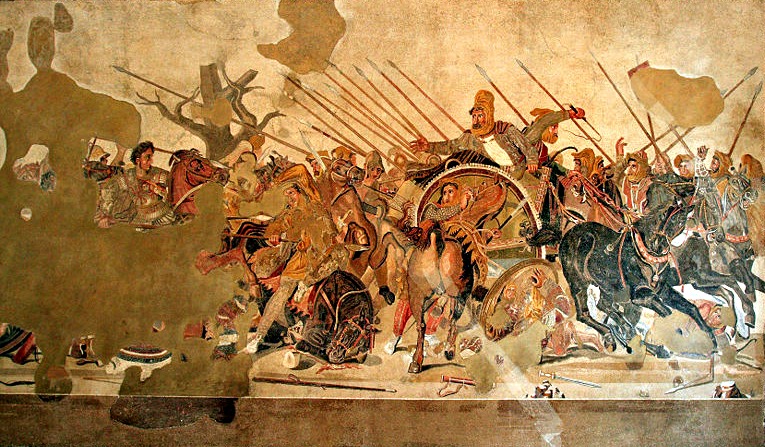 The Alexander Mosaic, dated to 100 BC and by an unknown artist, shows his battle versus Darius II of Persia. It was found in the House of the Faun in Pompeii. Like Genghis Khan, Alexander the warrior spurred technological innovation and creativity. As the saying goes, a few years of Borgia's in Italy gave us the Renaissance, while hundreds of years of Swiss peace only got us the cuckoo clock.

If nature and humanity were a mathematical model, collaborative behavior would be rare, limited to relatives, but a new model shows that intelligence and cooperative behavior can co-evolve to solve the problem of collective action in groups and to overcome the costs of having a large brain - as long as they are going to war.

The mathematical model also predicts that if high collaborative ability cannot evolve, perhaps for example because the costs of having a big brain are too high, the species will harbor a small proportion of individuals with a genetic predisposition to perform individually-costly but group-beneficial acts.

If war was necessary for intelligence does that still mean collaborative efforts like hunting were transposed into war or is it the other way around? The new model says anthropologists have it backwards. Humans discovered that fighting wars worked best in groups and then mapped that belief to peacetime cooperation.

"Our ability to effectively collaborate with others is largely responsible for what our species came to be. The big question is how this ability first evolved when there are large metabolic and physiological costs related to human brain size and when collaboration can be easily undermined by free riders. The model offers an answer which emphasizes the role of between-group conflicts in shaping unique human features," said lead author Sergey Gavrilets, a professor of ecology and evolutionary biology and mathematics at the University of Tennessee, Knoxville, and Associate National Institute for Mathematical and Biological Synthesis Director for Scientific Activities.