Materials made from nano-particles have long been touted as the future viable solar energy production and better touch screens.

The black box between the present and the future of these wonder-materials is organizing the nanoparticles into orderly arrangements. Nanoparticles of magnetite, the most abundant magnetic material on earth, are found in living organisms from bacteria to birds. Nanocrystals of magnetite self-assemble into fine compass needles in the organism that help it to navigate.

Collaborating with nanochemists led by Rafal Klajn at the Weizmann Institute of Science in Israel, who found that magnetite nanocubes can self-assemble into helical superstructures under certain conditions, University of Illinois at Chicago theoretical chemist Petr Kral and his students simulated the phenomenon and explained the conditions under which it can occur. 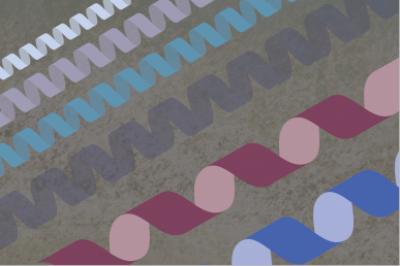 The Weizmann researchers dissolved the nanocrystals and exposed the solution to an external magnetic field. As the solution evaporated, helical chains of nanoparticles formed. Surprisingly, the spiral helices were chiral -- that is, either left- or right-handed -- despite the fact that the nanoparticles themselves are not chiral. Densely packed assemblies of helices tended to adopt the same handedness.

Kral's UIC team modeled the self-assembly to determine how helices formed in their collaborators' experiments -- and why the helices had chirality.

They found that the self-assembly into chiral helices is the result of the competing forces acting on them — Zeeman force from the external magnetic field, dipole-dipole magnetic force, magneto-anisotropic directional force, weakly attractive van der Waals forces, and others. The chemistry of the nanoparticle ligands, the solvent, and temperature may also play a role.

In the presence of an external magnetic field, the superparamagnetic nanocubes — which are randomly magnetic and can flip with temperature changes — became tiny magnets with different symmetries of the competing forces acting between them. As a result, when two cubes are face-to-face, they tend to tilt with respect to each other, forming a small angle to the right or left — the seed of a chiral helix, as more nanocubes line up with the first two.

"We had to write a new, efficient Monte Carlo computer code describing all the necessary terms, all the values, and then explain how the highly unusual behavior that Klajn observed – the helices' self-assembly – happens," Kral said.