News Staff
Researchers have discovered a pathway that may improve understanding of molecular mistakes that cause older women to have babies with Down syndrome.

As women age, so do their eggs and during a woman's 30s, the chance that she will conceive a Down syndrome fetus increases dramatically. Most such pregnancies arise from mistakes in a process called meiosis, a specialized cell division that creates gametes, or sex cells (sperm and eggs). Mistakes in meiosis can lead to gametes with the wrong number of chromosomes, which can cause Down syndrome.

In Down syndrome, the fetus inherits three copies of chromosome 21 (trisomy 21). Chromosome segregation errors in oocytes, or immature egg cells, are the leading cause of birth defects and pregnancy loss in humans.  By the time a woman reaches her late thirties, the probability that she will conceive a fetus with the wrong number of chromosomes exceeds 30 percent. This phenomenon is known as the maternal age effect, and although it has been well-documented, researchers are only beginning to understand the molecular mechanisms that may be responsible. 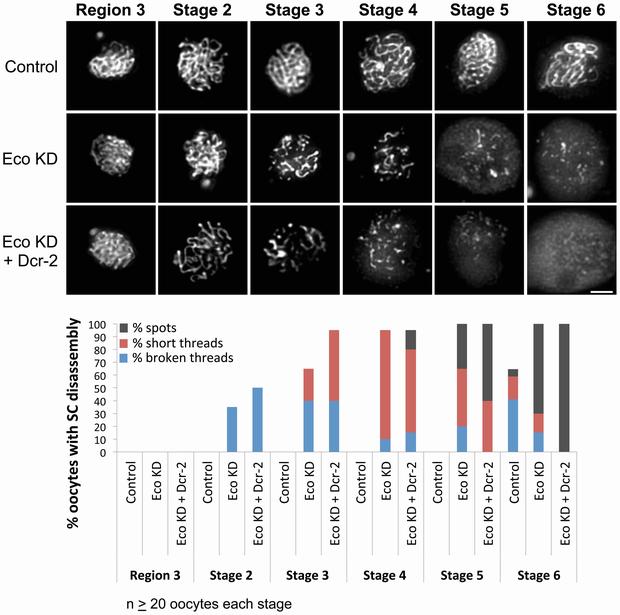 A new study shows for the first time that new protein linkages occur in immature egg cells after DNA replication and that these replacement linkages are essential for these cells to maintain meiotic cohesion for long periods.

Accurate chromosome segregation during meiosis depends on protein linkages, or cohesion, that hold together sister chromatids, which are identical copies of a replicated chromosome. Recent evidence from Dartmouth and other laboratories indicates that meiotic cohesion weakens over time, contributing to the maternal age effect. The widely held view is that under normal conditions, meiotic cohesion is only established once, when the oocyte undergoes DNA replication. This means that a prerequisite for error-free segregation in human oocytes is that meiotic cohesion established in oocytes during fetal development must remain intact for decades (until menopause). A gradual decline of cohesion over the years is thought to contribute to the maternal age effect. However, researchers at Dartmouth and elsewhere have questioned the likelihood that the original cohesive linkages generated in fetal oocytes remain intact on meiotic chromosomes for even five years, much less 25 years. An alternative possibility is that maintenance of meiotic cohesion is an active process that utilizes a specialized "rejuvenation" program to establish new cohesive linkages throughout the extended timeframe that oocytes remain arrested until ovulation.

Bickel established in a 2003 study that the fruit fly Drosophila can be used to study why more mistakes occur during cell division as eggs become older. In this latest research, she and her co-authors tested the hypothesis that oocytes possess an active cohesion rejuvenation program. They were able to reduce cohesion proteins in fruit fly oocytes after normal meiotic cohesion was established during DNA replication but before oocyte maturation and ovulation. Their results show that when cohesion proteins are reduced in this manner, cohesion is lost prematurely and chromosomes missegregate during the meiotic divisions.

Their work provides the first demonstration that under normal physiological circumstances, generation of new cohesive linkages takes place in oocytes after meiotic DNA replication and that these replacement linkages are essential for oocytes to maintain meiotic cohesion for long periods of time.

"Whether rejuvenation of meiotic cohesion occurs in mammals remains to be demonstrated, but it is hard to understand why fruit flies would possess a mechanism to actively keep cohesion intact during a short time frame (six days) if no similar program exists during the much longer time frame that mammalian oocytes must maintain cohesion (months to years)," says Associate Professor Sharon Bickel, the study's senior author.

Under normal conditions, rejuvenation of cohesion in fruit fly oocytes ensures that the number of cohesive linkages is sufficient to promote accurate chromosome segregation. But when experimental techniques are used to force these cells to undergo "aging," cohesion is lost prematurely and chromosomes missegregate, according to Bickel's 2008 study. Therefore, under "aging" conditions, the normal rejuvenation pathway in fruit fly oocytes is incapable of sustaining cohesion.

"This raises that intriguing possibility that if a meiotic cohesion rejuvenation pathway also operates in human oocytes, its effectiveness may decline with age," Bickel says. "Cohesion defects may become pronounced in older women not because the original cohesive linkages finally give out, but because the rejuvenation program can no longer supply new cohesive linkages at the same rate at which they are lost. Further investigation of this possibility may change the way we think about the maternal age effect."