The massive ice sheet that covers about 80 percent of Greenland is the largest single chunk of melting snow and ice in the world
and for that reason it is considered the biggest potential contributor to rising sea levels due to glacial meltwater in a warming world.

What gets the most media, and therefore a lot of research, attention is the ice sheet's aquamarine lakes -- bodies of meltwater that tend to abruptly drain -- and monster chunks of ice that slide into the ocean to become icebergs.

But a new study reveals a vast network of little-understood rivers and streams flowing on top of the ice sheet that could be responsible for at least as much, if not more, sea-level rise as the other two sources combined. When snow and ice thaw during the summer, these waterways form an intricate drainage system that captures virtually all surface runoff and is capable of flushing its entire volume in less than two days, the team found. 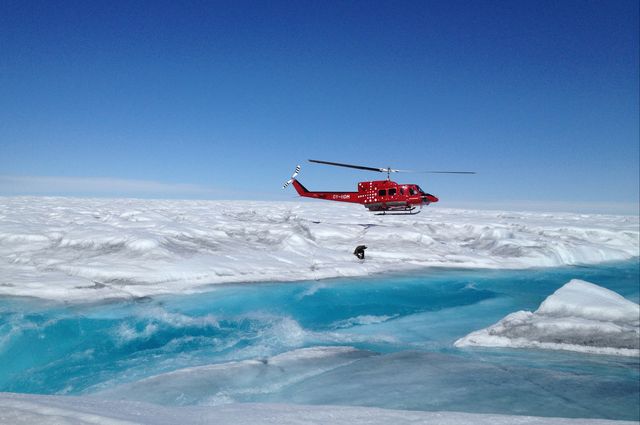 The researchers ironically used a fossil-fuel belching helicopter to get around while studying global warming. They did so because the situation was unsteady and their jobs are important, which is the argument used by people against drastic CO2 cuts also. Credit: UCLA

"It's the world's biggest water park, with magnificent and beautiful -- but deadly -- rushing blue rivers cutting canyons into the ice," said Laurence C. Smith, the study's lead author and the chair of UCLA's geography department.

With funding from NASA's Cryospheric Sciences program, 11 researchers spent six days during July 2012, gathering measurements in an environment so hostile and dangerous that no such effort had ever been attempted.

Because the ice sheet was so unsteady and the amount of territory they covered was so great, researchers moved around by helicopter. To map the network and compute the rivers' flow rates, they used military-grade satellite imagery, buoys outfitted with GPS technology and a drone boat specially designed for the project by a Jet Propulsion Laboratory engineer who also worked on the Mars Rover.

The study happened to coincide with a massive and extremely unusual melt. On only one other occasion in the past 700 years -- in 1889 -- has the ice sheet thawed as much as it did in 2012.

"It was a real preview of just how quickly that ice sheet can melt and the meltwater can escape," Smith said.

The team was particularly interested in learning how much of the meltwater would be retained, how much of it moved to the ocean, and how quickly and through what means it did so.

"The question was whether the ice sheet acts like a sponge or like Swiss cheese," Smith said.

Ultimately, the researchers determined the answer to be a little bit of both. At least on top of its surface, the sheet was like Swiss cheese: All of the 523 actively flowing streams and rivers across a 2,000-square-mile area of the ice sheet drained into moulins, or sink holes, that promptly carried meltwater under the ice sheet and into the ocean.

Meanwhile, a modest "sponge" effect occurred somewhere below the surface -- either inside or, more likely, at the base of the ice sheet. Within this area, the researchers determined, the ice sheet drained at a rate of 55,000 to 61,000 cubic feet per second, a rate more than double the average flow of the Colorado River, produced from less than one-tenth of its watershed area.

The group also specifically examined the Isortoq River, which exits the ice sheet on land and drains about one-fifth of the mapped networks. Its output is critical because it's a key element of the Modele Atmospherique Regional, or MAR, a climate model used by the Intergovernmental Panel on Climate Change to develop worldwide responses to global warming. The researchers found that the Isortoq's amount of discharge was more than 25 percent less than the model predicted.

"There's a lot of water coming out of the ice sheet but a certain amount can't be accounted for," said study co-author Vena Chu, a UCLA doctoral candidate in geography.

The discrepancy suggests that at least some of the meltwater is being captured in a subterranean manner that has yet to be accounted for, the researchers said.

"The model automatically assumes that the meltwater is going directly to the ocean," said Marco Tedesco, a co-author and head of City College of New York's Cryospheric Processes Laboratory, which operates MAR. "Some can get retained under the ice. More research is definitely needed."

Still, researchers found that the flow in the Isortoq River carried meltwater from the ice sheet to the ocean at an average flow rate of 23,000 to 46,000 feet per second -- a massive flow rate that is all the more awe-inspiring because the Isortoq is but one of at least 100 large terrestrial rivers connecting the melting Greenland ice sheet to the world's oceans.

The new research will allow scholars to refine existing climate models, which appear to modestly overestimate the direct contribution from runoff to rising sea level, said Tedesco, an associate professor of earth and atmospheric sciences at CCNY.

"If we can get better estimates, then we can have better projections for the extent and the impact of global warming," he said. "Greenland is really the big player for sea level rise in the future, so improving climate models is extremely crucial."