The X-ray structure of a beta-lactamase enzyme from one such microbe, the halophile Chromohalobacter sp. 560, shows it has highly selective cesium binding sites.  A 1.8 to 2.9 angstrom resolution structure for this enzyme. Anomalous X-ray diffraction also revealed binding sites in the protein for Sr2+ and Cs+ ions, the team reports.

It is well known that proteins from halophilic bacteria have an abundance of acidic amino acids and so present an acidic surface that can interact with a range of metal ions. There are twelve types of such enzymes recorded in the Protein Data Bank that can bind to sodium, magnesium, potassium, calcium, iron, zinc, strontium and cadmium ions. Indeed, the presence of these materials in various enzymes is usually a prerequisite for their structure and functionality. 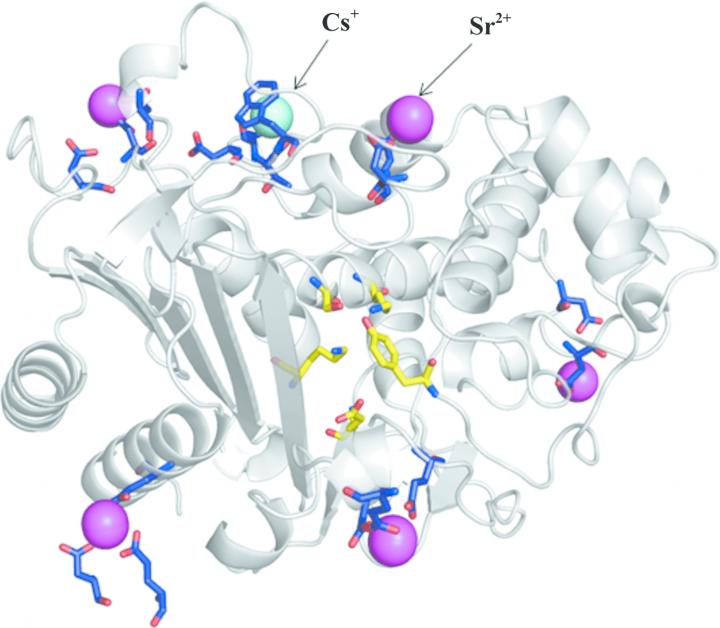 Because of this metal affinity, the team reasoned that proteins from halophiles might be useful as molecular mops for separating precious metals from mixtures or in remediation when toxic metals ions must be extracted selectively from a site. More specifically, the proteins could act as models for artificial reagents to be used in this context.

The researchers demonstrated how they could locate caesium ions in a specific site within the protein even in the presence of a nine-fold molar excess of sodium ions, which would normally out-compete any binding site. Intriguingly, the presence of strontium and caesium ions does not diminish the activity of the enzyme determined using isothermal titration calorimetry. "The observation of a selective and high-affinity caesium-binding site provides important information that is useful for the design of artificial caesium-binding sites that may be useful in the bioremediation of radioactive isotopes," the team explains.

With respect to the Fukushima incident, the team explains that most of the radioactive caesium was deposited on the land at the site. Amounting to 2.4 petabequerels (PBq) of radioactivity and it is fixed in soil particles, comprising weathered biotite, a micaceous mineral found in many igneous and metamorphic rocks. Much of the soil has been removed, but the issue of extracting the radioactive elements for safe disposal has not been addressed.

Moreover, the soil that remains at the site is also contaminated and no cost-effective method for extracting the caesium that leeches from it into the environment has been demonstrated.

The team suggests that protein absorbents related to the beta-lactamase from Chromohalobacter might be designed using the techniques of synthetic biology, the most likely approach being to engineer a native protein to make the affinity site described by the team. The genes for such an agent might then be engineered into new breeds of plant that could be grown on the site. With the protein absorbents expressed in plant roots, caesium could be extracted from the soil efficiently, the plants harvested and their new radioactive cargo disposed of safely, leaving behind improved soil.

"Although the removal of caesium is an important theme for us, public acceptance for the use of genetically engineered plants is not strong enough here in Japan, so we are going to shift our theme for finding useful sites to gather other rare materials using engineered proteins derived from the structural information of the halophilic proteins," said co-author Ryota Kuroki.