News Staff
A new study using stem cells derived from patients who have  Parkinson's disease (PD) has confirmed for the first time what scientists have long suspected - that the most common mutation linked to both sporadic and familial Parkinson's disease (PD) wreaks its havoc by altering the function of mitochondria in neurons that produce the neurotransmitter dopamine.

Mitochondria are energy-producing organelles found in large numbers in most cells and are necessary for life. Zeng says the Park2 mutation altered mitochondrial structure and function in dopamine producing neurons, causing them to die. Dopamine is an essential neurotransmitter which regulates movement and emotion.

Animal models had provided tantalizing evidence for such a link but the researchers at the Buck Institute have confirmed that finding in human cells for the first time. 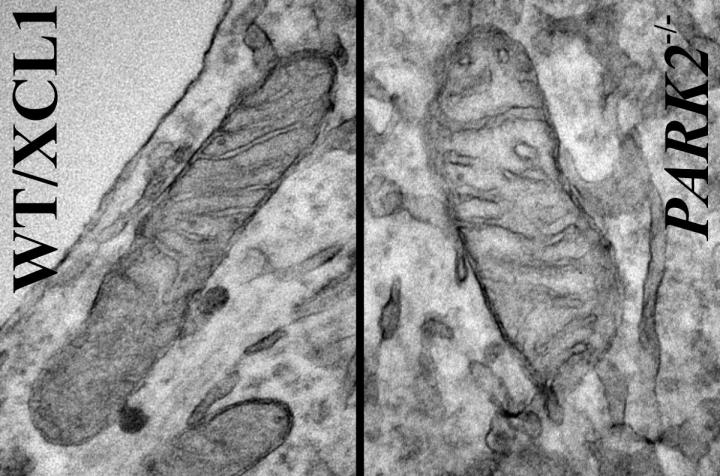 Mitochondria from iPSC-derived dopaminergic neurons. Left is control iPSC line and the neuron on the right was derived from the same (isogenic) iPSC line but carrying a Park2-null mutation, the most common mutation for Parkinson's disease.Credit: Courtesy of Akos Gerencser, PhD

"If we can find existing drugs or develop new ones that prevent damage to the mitochondria we would have a potential treatment for PD," said Buck faculty member Xianmin Zeng, PhD, lead scientist on the study. "This is the first time we can show a real and observable change in mitochondria in human cells affected by a PD mutation."

The research involved making mutations in the Park2 gene in well-characterized induced pluripotent stem cell (iPSC) lines as well as generating iPSC lines from skin cells of four patients who have PD. "What we saw was extraordinary," said Zeng. "We saw the same characteristics in the dopaminergic neurons derived from patients as well as ones derived from the lines where the mutation was introduced."

The finding promises to be significant in the search for treatments for an incurable disease, which affects nearly one million Americans and causes a progressive decline in movement and muscle control. Existing drugs can ease symptoms but often cause troubling side effects over time. While using patient-specific iPSC lines has been held as a potential gold standard for testing potential therapeutics for PD, Zeng says there has always been concern that background genetic differences between patients would render the testing inconclusive for larger populations of PD patients. According to Zeng, this research addresses those concerns and paves the way for testing of compounds for PD in human cells, an activity that is underway in the Buck lab of Julie Andersen, PhD, who also studies PD.

Zeng, who receives support from the California Institute for Regenerative Medicine (CIRM), says there are up to ten mutations linked to PD. Her lab is developing human iPSC models based on mutations in Pink1, SNCA, Park7 and Lrrk2, which are those more closely implicated in PD. Zeng is also involved in research aimed at getting a stem cell derived treatment for PD ready for testing in humans.