News Staff
The Arctic Ocean sea ice cover emerged 2.6 million years ago - and it hasn't changed since. Not in all of the recurring warming cycles we have had and not even in 2006, when pundits predicted it would be melted by 2014.

It wasn't always that way. Between 4 and 5 million years ago, the extent of sea ice cover in Arctic was much less than it is today. Recent IPCC reports believe that the expanse of the Arctic ice cover has been quickly shrinking since the 1970s and that 2012 was the known sea ice minimum in that time.

Researchers recently studied the trend in the sea ice extent in the Arctic Ocean from 5.3 to 2.6 million years ago, the last time the Earth experienced a long period with a climate that, on average, was warm before cold ice ages began to alternate with mild interglacials. 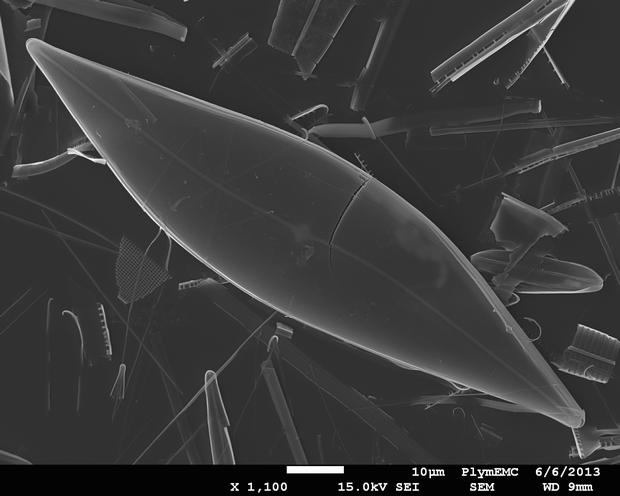 A microphotograph of sea-ice diatoms (Pleurosigma stuxbergii), which produces the chemical fossil that scientists study to describe the extent of sea ice in the Arctic. Photo: Thomas A. Brown and Simon T. Bel

“When we studied molecules from certain plant fossils preserved in sediments at the bottom of the ocean, we found that large expanses of the Arctic Ocean were free of sea ice until four million years ago,” said marine geologist Jochen Knies of The Arctic University of Norway. “Later, the sea ice gradually expanded from the very high Arctic before reaching, for the first time, what we now see as the boundary of the winter ice around 2.6 million years ago.”

The research was undertaken because the consensus among IPCC climate scientists is that present-day global warming is strongly tied to a shrinking ice cover in the Arctic Ocean and that by the end of this century, the Arctic Ocean will completely free of sea ice. Polar oceans , their temperature and salinity, are important drivers for world ocean circulation that distributes heat in the oceans. It also affects the heat distribution in the atmosphere. Trying to anticipate future changes in this finely tuned system is currently impossible, which is why improving that has become a priority for climate researchers.

A deep well into the ocean floor northwest of Spitsbergen was the basis for this research. It was drilled as part of the International Ocean Drilling Programme, (IODP), to determine the age of the ocean-floor sediments in the area. Then, by analysing the sediments for chemical fossils made by certain microscopic plants that live in sea ice and the surrounding oceans, Knies and his co-workers were able to fingerprint the environmental conditions as they changed through time.

“One thing these layers of sediment enable us to do is to “read” when the sea ice reached that precise point,” Knies said.

The scientists believe that the growth of sea ice until 2.6 million years ago was partly due to the considerable exhumation of the land masses in the circum-Arctic that occurred during this period. “Significant changes in altitudes above sea level in several parts of the Arctic, including Svalbard and Greenland, with build-up of ice on land, stimulated the distribution of the sea ice,” he said.
“In addition, the opening of the Bering Strait between America and Russia and the closure of the Panama Cannel in central America at the same time resulted in a huge supply of fresh water to the Arctic, which also led to the formation of more sea ice in the Arctic Ocean.”

All the large ice sheets in the Northern Hemisphere existed around 2.6 million years ago.
News Articles
More Articles All Articles
About