Cellular structures called microtubules are tagged with a variety of chemical markers that can influence cell functions and the pattern of these markers makes up the "tubulin code". One of the main writers of this code is tubulin tyrosine ligase-7 (TTLL7), according to a new paper.

TTLL7 is a protein that adds glutamate tags onto microtubules. Using a number of advanced imaging and biochemical techniques, Dr. Roll-Mecak and her colleagues at the Scripps Research Institute in La Jolla, California, have revealed the 3-D structure of TTLL7 bound to the microtubule. There are nine proteins that make up the TTLL family, but TTLL7 is the most abundant in the brain and one of the main tubulin code writers. These results represent the first atomic structure of any member of the TTLL family. 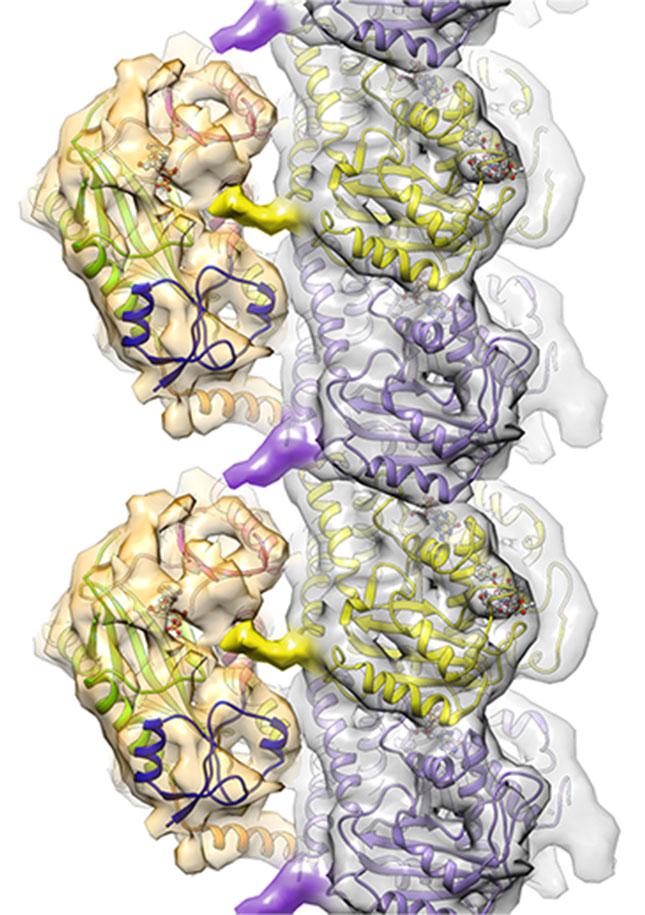 TTLL7 (gold structures on the left) impacts cell function by binding to microtubules (silver structure made up of purple and yellow subunits) and adding chemical markers to the surface. Credit: Image courtesy of the Roll-Mecak lab.

"Understanding the structural characteristics of this specific molecule opens the door to learning how elaborate patterns of chemical markers are laid down on microtubules. Deciphering the tubulin code could tell us how the markers affect normal cellular function as well as what happens when they are damaged, which can lead to neurodegenerative disorders," said Antonina Roll-Mecak, Ph.D., NIH National Institute of Neurological Disorders and Stroke (NINDS)  scientist and senior author of the study in Cell. "This was a very surprising result, as no one had been able to visualize these tails on the microtubule before."

Microtubules are cylindrical structures that provide shape to cells and act as conveyor belts, ferrying molecular cargo throughout cells. Although all microtubules have the same basic appearance, they are marked on their outside surface with a variety of chemical groups. These markers impact a cell's activity by changing the stability of microtubules, thus affecting cell shape, or by repositioning molecular cargo traveling on the microtubules.

"The microtubule markers are constantly being added and removed, depending on the local needs of the cell. Think about a highway system where street signs are constantly changing and roads are quickly built or torn apart," said Roll-Mecak.

The most common microtubule marker in the brain is glutamate. The addition of glutamate markers to microtubules plays important roles in brain development and brain cell repair following injury. For example, one of the signatures of damaged cells in cancer or blunt trauma is a change in the pattern of these microtubule markers. In addition, mutations in TTLL genes have been linked with several neurodegenerative disorders.

"Our detailed analysis of TTLL7 also may provide important insights into ways that the other members of the TTLL family function. This study is the first step in gaining a more complete picture of how the tubulin code is established," said Dr. Roll-Mecak.

Her lab plans to extend their research by investigating interactions between members of this family of proteins. "We want to mix and match the TTLL proteins to see how we can control patterns of microtubule tagging. From that, we can learn how the cell is making those patterns and what happens during cellular damage, as in cancers or neurodegeneration, when these patterns are disrupted," said Dr. Roll-Mecak.

She added that this research may lead to the development of small molecules that can regulate activity of TTLL proteins, which may have implications for disorders linked to mutations in TTLL genes.