News Staff
NaSt1, about 3,000 light years away, was discovered a few decades ago and identified as a Wolf-Rayet star, a rapidly evolving star that is much more massive than our Sun.

Wolf-Rayet stars lose their hydrogen-filled outer layers quickly, exposing a super-hot and extremely bright core where helium is fusing into heavier elements. Typically, Wolf-Rayet stars have two outward flowing lobes of material, but in this case, the Hubble observations revealed a pancake-shaped disk of gas encircling the star. This vast disk is more than 3 billion billion kilometers wide. It seems to have formed in the last few thousand years from an unseen companion star that snacked on its outer atmosphere.

The star is so weird that astronomers have nicknamed it “Nasty 1”. 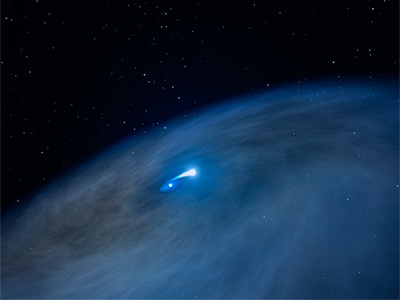 An artist's illustration of the 'Nasty 1' system, with a vast disk of gas surrounding a massive, bright Wolf-Rayet star (shown at center). A close companion star is pulling gas from the Wolf-Rayet, shown by the bridge of bright material connecting the two stars. This act of celestial cannibalism exposes the massive star's hot, helium core. Some of the material, however, is escaping into space, forming the huge disk. This disk structure has never been seen before around a Wolf-Rayet star. Credit: NASA, ESA and G. Bacon (STScI)

Lead author of the Monthly Notices of the Royal Astronomical Society paper Jon Mauherhan of the University of California, Berkeley, thinks that the system developed as  NaSt1 evolved and swelled up. A companion star stripped off its outer layers, gained mass and exposed the core of the massive star, creating the present day Wolf-Rayet object.

This transfer of mass from one star to another is not completely efficient and for a short period (by astronomical standards - up to ten thousand years) some of the gas is spilling out, creating the enormous disk seen by Hubble.
News Articles
More Articles All Articles
About