Two miles below the surface of the ocean, researchers have discovered new microbes that "breathe" sulfate. These microbes, which have yet to be classified and named, exist in massive undersea aquifers -- networks of channels in porous rock beneath the ocean where water continually churns.

About one-third of the Earth's biomass is thought to exist in this largely uncharted environment.

Sulfate is a compound of sulfur and oxygen that occurs naturally in seawater. It is used commercially in everything from car batteries to bath salts and can be aerosolized by the burning of fossil fuels, increasing the acidity of the atmosphere.

Microbes that breathe sulfate -- that is, gain energy by reacting sulfate with organic (carbon-containing) compounds -- are thought to be some of the oldest types of organisms on Earth. Other species of sulfate-breathing microbes can be found in marshes and hydrothermal vents. 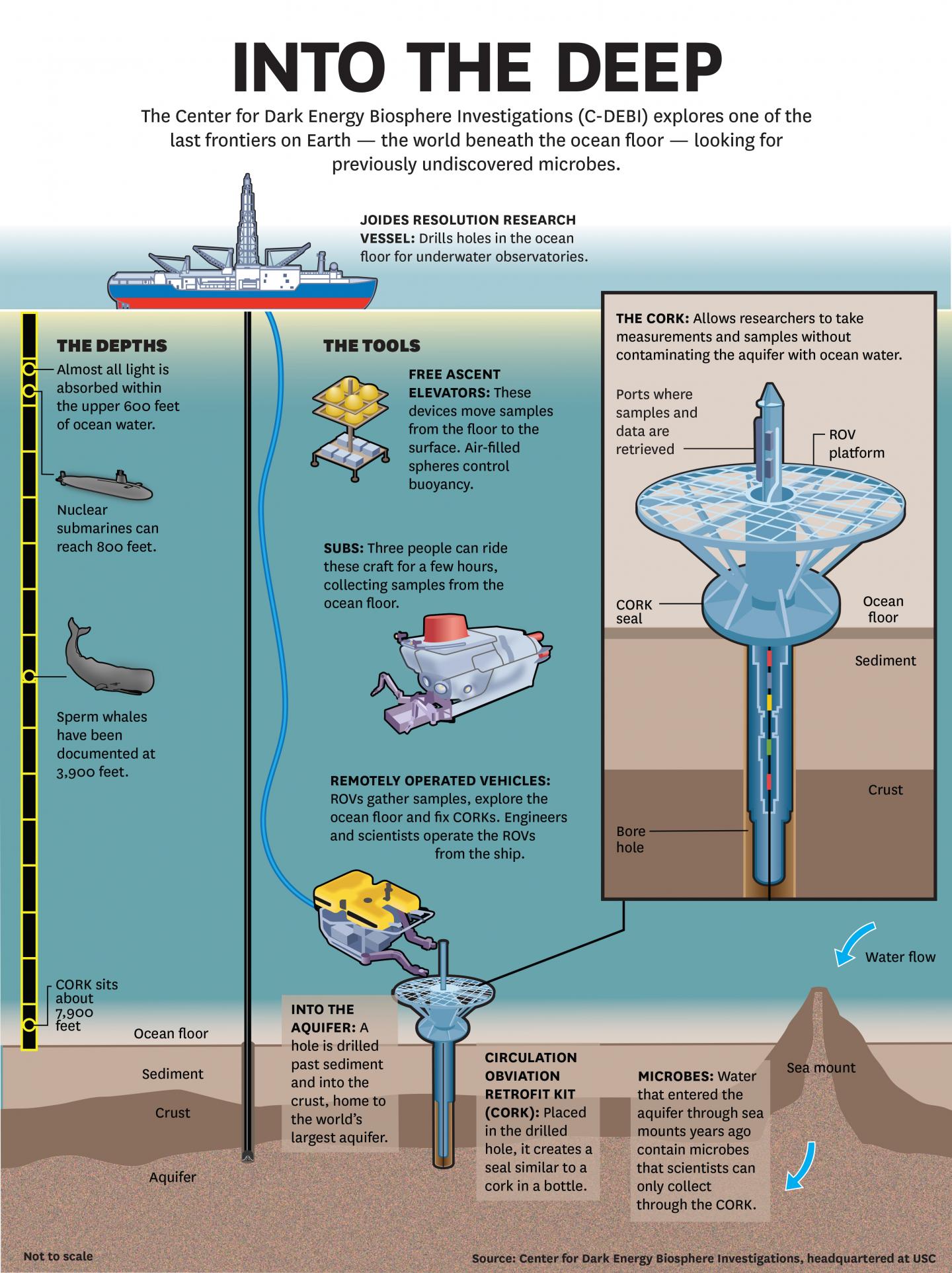 The technology that allowed the scientists to collect samples of water from an aquifer two miles below the ocean without contaminating the samples with ocean. Courtesy of USC

Microbes beneath the ocean's crust, however, are incredibly tricky to sample.

"It was surprising to find new bugs, but when we go to warmer, relatively old and isolated fluids, we find a unique microbial community," said Alberto Robador, postdoctoral researcher at USC lead author of the paper in Microbiology.

Researchers from USC and the University of Hawaii took their samples from the Juan de Fuca Ridge (off the coast of Washington state), where previous teams had placed underwater laboratories, drilled into the ocean floor. To place the labs, they lowered a drill through two miles of ocean and bored through several hundred feet of ocean sediment and into the rock where the aquifer flows.

"Trying to take a sample of aquifer water without contaminating it with regular ocean water presented a huge challenge," said Jan Amend, professor at USC Dornsife and director of the Center for Dark Energy Biosphere Investigations (C-DEBI), which helped fund the research.

To solve this problem, C-DEBI created Circulation Obviation Retrofit Kit (CORK) observatories. The moniker was basically dreamed up to fit the term "CORK" because these devices create a seal at the seafloor, like a cork in a bottle, allowing scientists to deploy instruments and sampling devices down a borehole while keeping ocean water out.

Samples were then shuttled to the surface by remote-controlled undersea vehicles or "elevators" -- balloons that drop ballast and float samples gently up to the waiting scientists.

Like the microbes on the forest floor that break down leaf litter and dead organisms, the microbes in the ocean also break down organic -- that is, carbon-based -- material like dead fish and algae. Unlike their counterparts, however, the microbes beneath the ocean crust often lack the oxygen that is used on land to effect the necessary chemical reaction.

Instead, these microbes can use sulfate to break down carbon from decaying biological material that sinks to the sea bottom and makes its way into the crustal aquifer, producing carbon dioxide.

Learning how these new microbes function will be important to getting a more accurate, quantified understanding of the overall global carbon cycle -- a natural cycling of carbon through the environment in which it is consumed by plants, exhaled by animals and enters the ocean via the atmosphere. This cycle is currently being disrupted by man-made carbon dioxide emissions.

"This is the first direct account of microbial activity in these type of environments," Robador said, "and shows the potential of these organisms to respire organic carbon."