News Staff
A new study has examined why beavers don't get tooth decay even though they don't brush their teeth or drink fluoridated water.

It isn't simply shorter lifespan, if a human does not brush their teeth for 20 years they are likely to develop problems. Instead it seems to be the pigmented enamel of beavers, which contains iron, makes their teeth both harder and more resistant to acid than regular enamel, including that treated with fluoride.

Layers of well-ordered hydroxylapatite “nanowires” are the core structure of enamel, but Northwestern professor of materials science and engineering Derk Joester and colleagues discovered it is the material surrounding the nanowires, where small amounts of amorphous minerals rich in iron and magnesium are located, that controls enamel’s acid resistance and mechanical properties. Enamel is a very complex structure, making study of it challenging. Joester’s team is the first to show unambiguously that this “amorphous,” or unstructured, phase exists in enamel, and they are the first to show its exact composition and structure. 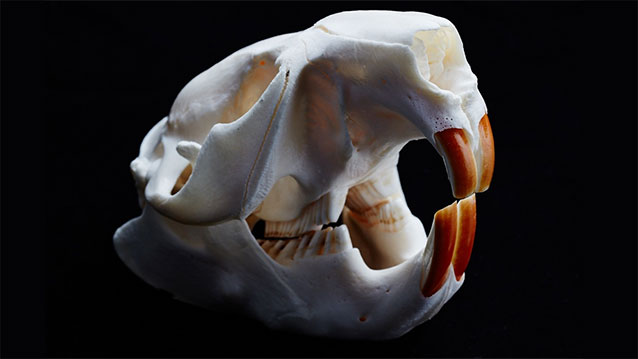 “The unstructured material, which makes up only a small fraction of enamel, likely plays a role in tooth decay,” Joester said. “We found it is the minority ions -- the ones that provide diversity -- that really make the difference in protection. In regular enamel, it’s magnesium, and in the pigmented enamel of beaver and other rodents, it’s iron.”

Dental caries -- better known as tooth decay -- is the breakdown of teeth due to bacteria. “Caries” is Latin for “rottenness” and it is one of the most common chronic diseases and a major public health problem, despite strides made with fluoride treatments. According to the American Dental Association, $111 billion a year is spent on dental services in the U.S., a significant part of that on cavities and other tooth decay issues. A staggering 60 to 90 percent of children and nearly 100 percent of adults worldwide have or have had cavities, according to the World Health Organization.

Since rodent enamel is similar to human enamel, they did a series of experiments with rabbit, mouse, rat and beaver enamel. Joester and colleagues imaged the never-seen-before amorphous structure that surrounds the nanowires. They used powerful atom-probe tomography and other techniques to map enamel’s structure atom by atom. The researchers subjected the teeth to acid and took images before and after acid exposure. They found the periphery of the nanowires dissolved (the amorphous material), not the nanowires themselves.

The researchers next identified amorphous biominerals in the structure, such as iron and magnesium, and learned how they contribute to both the mechanical hardness and resistance of enamel to acid dissolution.

Of particular interest to Joester and his colleagues was the pigmented enamel of the beaver’s incisors. Their studies showed it to be an improvement over fluoride-treated enamel in resisting acid. (The presence of iron gives the teeth a reddish-brown color.)

“A beaver’s teeth are chemically different from our teeth, not structurally different,” Joester said. “Biology has shown us a way to improve on our enamel. The strategy of what we call ‘grain boundary engineering’ -- focusing on the area surrounding the nanowires -- lights the way in which we could improve our current treatment with fluoride.”

A related paper was published this week by the journal Frontiers in Physiology.