In the 1970s, Florida environmentalists who had invented the notion that landfills were going to overrun America came up with the idea of making coral reefs out of tires. A few short decades later, the clean-up costs when those all came loose were 100X the supposed savings and tires have fallen out of favor as clever quick fixes since then.

Leave it to people in Tennessee to find a new use for old tires.  Oak Ridge National Laboratory
researchers have found a way to use them to make better lithium-ion batteries.

By modifying the microstructural characteristics of carbon black, a substance recovered from discarded tires, a team led by Parans Paranthaman and Amit Naskar is developing a better anode; the negatively charged electrode used as a host for storing lithium during charging. 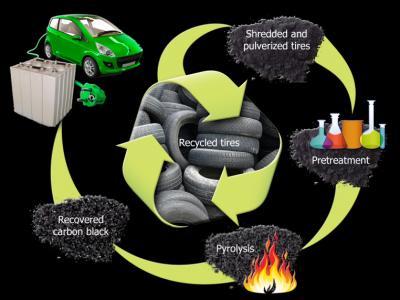 ORNL researchers' goal is to scale up the recovery process and demonstrate applications as anodes for lithium-ion batteries in large-format pouch cells. Credit: ORNL

"Using waste tires for products such as energy storage is very attractive not only from the carbon materials recovery perspective but also for controlling environmental hazards caused by waste tire stock piles," Paranthaman said.

The ORNL technique uses a proprietary pretreatment to recover pyrolytic carbon black material, which is similar to graphite but man-made. When used in anodes of lithium-ion batteries, researchers produced a small, laboratory-scale battery with a reversible capacity that is higher than what is possible with commercial graphite materials.

In fact, after 100 cycles the capacity measures nearly 390 milliamp hours per gram of carbon anode, which exceeds the best properties of commercial graphite. Researchers attribute this to the unique microstructure of the tire-derived carbon.

"This kind of performance is highly encouraging, especially in light of the fact that the global battery market for vehicles and military applications is approaching $78 billion and the materials market is expected to hit $11 billion in 2018," Paranthaman said.

Anodes are one of the leading battery components, with 11 to 15 percent of the materials market share, according to Naskar, who noted that the new method could eliminate a number of hurdles.