Using a neutron beam, researchers at The Ohio State University have able to track the flow of lithium atoms into and out of an electrode in real time as a battery charged and discharged, providing a kind of window into the inner workings of a lithium-ion battery for the first time.

They believe that neutron depth profiling (NDP) could one day help explain why rechargeable batteries lose capacity over time, or sometimes even catch fire.

They are using the technique to test new, high-capacity electrode materials, including ones containing tin, silicon, germanium and aluminum. These alternative electrodes could be capable of storing nearly three times as much energy as graphite, the material of choice in current lithium-ion batteries. They may also be less prone to overheating. 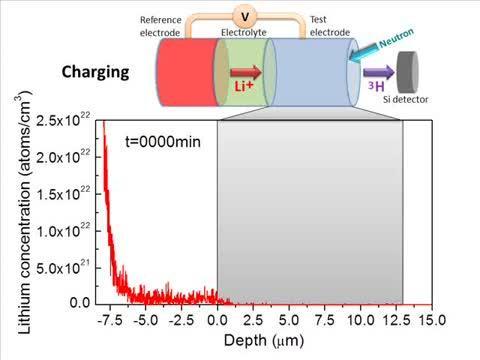 Using a neutron beam, chemists and engineers at The Ohio State University were able to track the flow of lithium atoms into and out of an electrode in real time as a battery charged and discharged. This visualization shows the level of charge in the electrode rising and falling as the battery charged and discharged. The study could one day help explain why rechargeable batteries lose capacity over time, or sometimes even catch fire. Courtesy of The Ohio State University

To Marcello Canova, assistant professor of mechanical and aerospace engineering at Ohio State, this successful application of NDP represents a huge step forward in studies of how batteries work.

Until now, Canova explained, researchers could only measure a lithium-ion battery's output (in voltage and current) and then make computer models of what might be going on inside—a process that he likened to "trying to study the combustion processes in a car engine when all you can do is measure the torque and speed at the wheels."

"This is the first time that anyone has been able to directly verify how the lithium concentration evolves in space and time within the electrode of a live battery cell containing a typical wet electrolyte," he said. "We believe this will pave the way to an improved understanding of the material and chemical processes that power batteries."

NDP is a well-known technique in nuclear research. It's also used in the semiconductor industry, where it measures the concentration of dopants in silicon wafers. The Ohio State team is the first to further develop NDP into a tool to investigate lithium transport phenomena in normal, working batteries during charging and discharging.

For this study, the research team developed their methodology at The Ohio State University Research Reactor and acquired the final data at the National Institute of Standards and Technology's Center for Neutron Research in Gaithersburg, Md., where they were assisted by the facility scientist, R. Gregory Downing.

NDP works in a way somewhat analogous to an MRI, in that it non-invasively captures images of an object's interior. In the same way an MRI can record a series of image slices over time to capture changes in moving tissue, such as the inflation of a lung while a person is breathing, NDP can measure how the composition of a slice of material changes over time.

But whereas an MRI subjects materials to a magnetic field and measures how the polarity of the atoms in that material change, NDP hits materials with a low-energy neutron beam and counts the different kinds of charged particles that are created when an individual neutron happens to collide with one of the atoms in the test material and annihilates it.

"Just like an MRI is the best way of seeing inside the human body without cutting it open, we believe that NDP is the best—and one of only a few—techniques capable of taking a non-invasive look inside a lithium-ion battery," said Anne Co, assistant professor of chemistry and biochemistry and associate fellow at Ohio State's Center for Automotive Research. The images they've obtained thus far are two-dimensional, but with further development, 3D imaging might be possible, she added.

Lithium-ion batteries are popular in cars and handheld electronics because they are light and powerful, though their charge capacity still fades over time.

"One possible explanation for the fading is that lithium is becoming trapped inside the electrodes, and NDP would be an ideal method to see and quantify trapped lithium," Co said.

The researchers measured the concentration of lithium in the battery anode—the negative electrode where positively charged lithium flows in as the battery charges, and out as the battery discharges. Normally, anodes in lithium-ion batteries are made of graphite, but for this experiment, the researchers replaced the graphite with a tin alloy.

Key to the experiment, said L. Raymond Cao, assistant professor of nuclear engineering, is that it was non-invasive, so researchers could get a true picture of battery function.

"We could hit it with a trillion neutrons per square centimeter, and the beam would still only consume one in a billion lithium atoms inside the battery," Cao said. "However, it is the capture of that one-in-a-billion reaction that tells us where the lithium ions are and how many."

In a working lithium-ion battery, the lithium must flow through a liquid electrolyte that fills the space between the cathode and anode—and that fact alone created the experiment's main challenge. NDP only works inside a vacuum chamber, and vacuums vaporize liquids. That's why another group of researchers in a 2011 study used a solid-state battery—that is, one in which the electrolyte was made from solid material.

Ohio State researchers got around the problem by sealing their test battery in a special holding cell designed and tested by Danny Liu, a doctoral student in chemistry and biochemistry at Ohio State. That's how they were able to measure lithium concentration in a truly typical lithium-ion battery, containing electrolyte and all.

In the future, the team will try to identify the factors that cause lithium to become trapped in anodes, and investigate new materials that might lessen the effect. Along the way, they hope to find ways to boost overall charge capacity. Aside from battery studies, the researchers say that NDP also holds promise for examining certain materials for solar cells and catalysts, including materials that are used to treat nuclear waste.