"Organoids", a futuristic-sounding term for three-dimensional cultures derived from tumors of cancer patients, closely replicate key properties of the original tumors - so close that these "organoid" cultures could be used for large-scale drug screens for the detection of genetic changes associated with drug sensitivity and pave the way for personalized treatment approaches.

To study the causes of cancer and develop new cancer treatments, many laboratories use experimental model systems such as cells grown from patient tumors. However, currently available cell lines may have been derived under suboptimal conditions and therefore fail to reflect important features of tumor cells. As a result, it has been challenging to predict the drug sensitivity of individual patients based on their unique spectrum of genetic mutations.

In recent years, scientists have developed organoid cell culture systems as an alternative approach to grow normal and diseased tissue in a dish. In contrast to cell lines, organoids display the hallmarks of the original tissue in terms of its 3D architecture, the cell types present, and their self-renewal properties. Given the advantages of organoids, a new study set out to test whether these cultures could potentially bridge the gap between cancer genetics and patient outcomes. 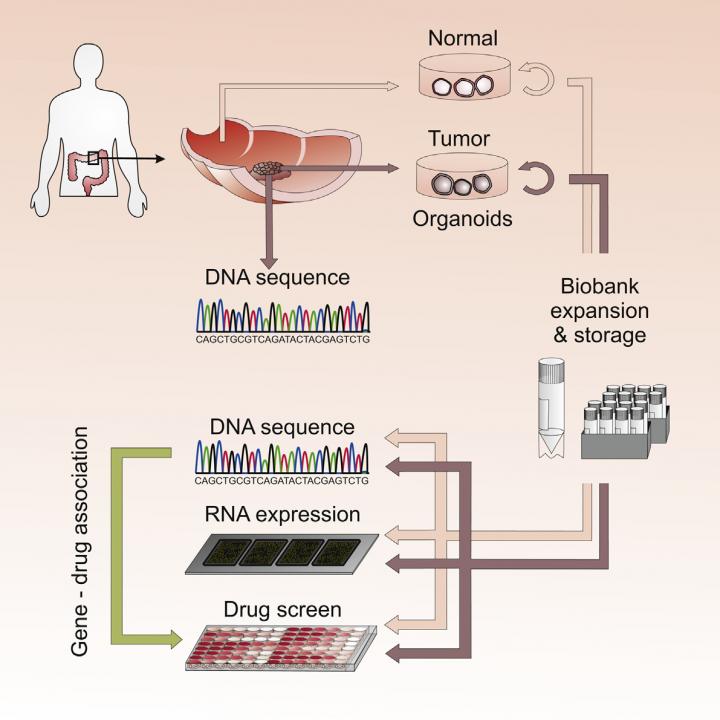 In the new study, the researchers grew 22 organoids derived from tumor tissue from 20 patients with colorectal cancer and then sequenced genomic DNA isolated from these cultures. The genetic mutations in the organoid cultures closely matched those in the corresponding tumor biopsies and agreed well with previous large-scale analyses of colorectal cancer mutations.

These findings confirm that the cultures faithfully capture the genomic features of the tumors from which they are derived as well as much of the genomic diversity associated with colorectal cancer.

"This is the first time that a collection of cancer organoids, or a living biobank, has been derived from patient tumors," says senior study author Mathew Garnett, a geneticist at the Wellcome Trust Sanger Institute. "We believe that these organoids are an important new tool in the arsenal of cancer biologists and may ultimately improve our ability to develop more effective cancer treatments."

To link drug sensitivity to genetic changes, the researchers next screened the responses of the organoids to 83 experimental and approved cancer drugs. Given their diverse genetic profiles, the organoids displayed a range of sensitivities to the drugs. In validation of the approach, the researchers identified previously reported associations between specific mutations and resistance to particular drugs.

The organoids also revealed a novel gene-drug association, indicating that the subset of cancer patients with RNF43 mutations would strongly benefit from a drug that inhibits a protein called porcupine. "At some point in the future, this approach may be suitable for modeling individual patient response to cancer therapies to inform clinical treatment," Garnett says.