When the ancient Japanese art of origami first came about, it consisted of one piece of paper folded to form cranes, flowers, and other shapes. Now, however origami has been revised and resized a bit. All the way down to the nanometer (1/1000000000 meters).

Scientists at the Technische Universitaet Muenchen (TUM) and Harvard University have have taken a new approach to building nanoscale structures out of DNA with its complex twisting and curving shapes. In the journal Science, they report a series of experiments in which they folded DNA, "origami-style," into three dimensional objects including a beachball-shaped wireframe capsule just 50 nanometers in diameter.

As a medium for nanoscale engineering, DNA has the dual advantages of being a smart material, meaning its not only tough and flexible but also programmable, and decades worth of research.
The basic tools that Dietz, Douglas, and Shih use are programmable self-assembly – directing DNA strands to form custom-shaped bundles of cross-linked double helixes – as well as targeted insertions or deletions of base pairs that can give such bundles a desired twist or curve.
Right-handed or left-handed twisting can be specified. They report achieving precise, quantitative control of these shapes, with a radius of curvature as tight as 6 nanometers. 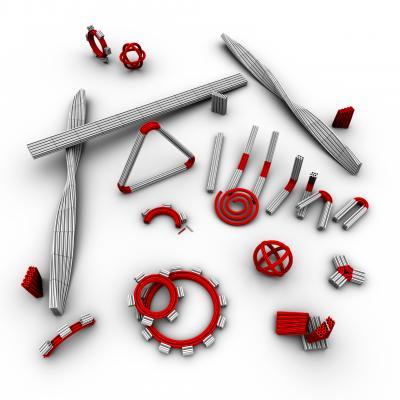 Scientists at the Technische Universitaet Muenchen and Harvard University have thrown the lid off a new toolbox for building nanoscale structures out of DNA, with complex twisting and curving shapes. In the Aug 7 issue of the journal Science, they report a series of experiments in which they folded DNA, origami-like, into 3-D objects including a beach ball-shaped wireframe capsule just 50 nanometers in diameter. (Photo Credit: H. Dietz, TUM Dept. of Physics, all rights reserved.)

"Our goal was to find out whether we could program DNA to assemble into shapes that exhibit custom curvature or twist, with features just a few nanometers wide," says biophysicist Hendrik Dietz, a professor at the Technische Universitaet Muenchen. Dietz's collaborators in these experiments were Professor William Shih and Dr. Shawn Douglas of Harvard University. "It worked," he says, "and we can now build a diversity of three-dimensional nanoscale machine parts, such as round gears or curved tubes or capsules. Assembling those parts into bigger, more complex and functional devices should be possible."

The "nanotoolbox" they have developed includes a graphical software program that helps to translate specific design concepts into the DNA programming required to realize them. Three-dimensional shapes are produced by "tuning" the number, arrangement, and lengths of helixes.

In their current paper, the researchers present a wide variety of nanoscale structures and describe in detail how they designed, formed, and verified them. "Many advanced macroscopic machines require curiously shaped parts in order to function," Dietz says, "and we have
the tools to make them. But we currently cannot build something intricate such as an ant's leg or, much smaller, a ten-nanometer-small chemical plant such as a protein enzyme. We expect many benefits if only we could build super-miniaturized devices on the nanoscale using materials that work robustly in the cells of our bodies – biomolecules such as DNA."