The human eye lens consists of a highly concentrated mix of several proteins. Protective proteins keep them from aggregating and clumping. If this protection fails, the lens blurs and the patient develops cataracts. Two research groups at the Department of Chemistry of the Technische Universitaet Muenchen (TUM) have succeeded in explaining the molecular architecture of this kind of protective protein. Their findings, which are published in PNAS (Proceedings of the National Academy of Sciences).

Cells have a variety of protein complexes that manage vital tasks. The functions of these "molecular machines" depend largely on their three-dimensional structure. In the first instance, proteins are long chains of amino acids, like a long piece of woolen thread. So-called chaperones help them to fold in the desired three-dimensional form after their production. If this folding process fails, the protein thread becomes a useless tangle.

Small heat shock proteins (sHsps) are a particularly important group of chaperones. They prevent the clumping of proteins under stress conditions. αB-crystallin and αA-crystallin are the
main representatives of the sHsps found in humans. Whereas αA-crystallin mainly occurs in the eye lens, αB-crystallin is also very common in the brain and in the heart and muscle tissue. In the eye lens, they counteract diseases like cataracts. Malfunctions of the αB-crystallin in tissue cells can give rise to cancer and neurological defects, including Alzheimer's disease. 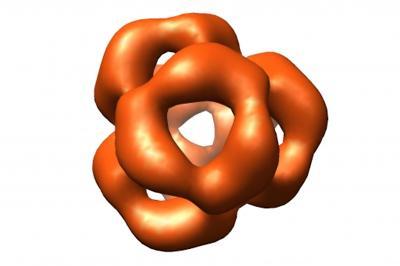 This is a three-dimensional reconstruction of αB crystallin by electron microscopy reveals a sphere-like structure with large openings to the interior of the protein. In the human eye, this molecular
machine serves as a "chaperone" to guide protein folding and prevent aggregation such as that responsible for cataracts. Better understanding of this 3-D structure could serve as the basis for
comparing healthy and disease-promoting mutants and, based on this, for clarifying the way they function. The scientists hope that this will lead to the discovery of new treatments. (Photo Credit: Dept. of Chemistry, Technische Universitaet Muenchen (TUM))

Despite intensive efforts, the molecular architecture of these α-crystallins proteins remains unknown. However, biochemists have now succeeded in producing αA-crystallins and B-crystallins recombinantly in bacteria, as well as obtaining uniform, clearly-structured complexes. The research groups were able to show that, contrary to previous ideas, αB-crystallin forms a defined globular structure comprising 24 subunits, which are reminiscent of a perforated soccer ball.

After the identification of the three-dimensional structure of αB-crystallin, which is currently being further refined, the basis has now been established for comparing healthy and disease-promoting
mutants and, based on this, for clarifying the way they function. The scientists hope that this will lead to the discovery of new treatments.