News Staff
The famous Vitruvian Man, drawn by Leonardo da Vinci, pictures the canon of human's proportions - though we did not become bilaterally symmetric all at once.

There are two main points of view on the last common bilaterian ancestor, its appearance and the course of evolution. It is likely that the ancestor of Bilateria appeared at the end of the Vendian period which is the last geological period of the Neoproterozoic Era preceding the Cambrian Period. It lasted from approximately 635 to 541±1 million years ago. The organisms, which lived in the Vendian sea, were mostly radially symmetrical creatures. Some of them were floating in the water, while others were crawling along the bottom or leading sessile benthic life.

There first point of view on the last common bilaterian ancestor suggests that it was a worm without a coelom what means the second body cavity. Proponents of this theory are sure that in addition to the lack of the coelom the last common bilaterian ancestor was devoid of any appendages and had simple nervous system. According to the first view, the coelom appeared independently in different groups of bilaterally symmetrical animals. 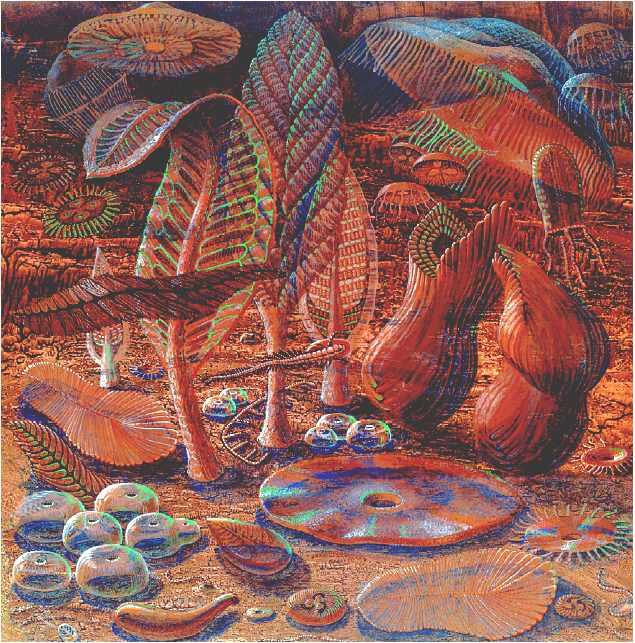 This is how the organisms which lived in the sea at the end of the the Vendian period looked 600 million years ago. Picture from the exposure of The Y. A. Orlov Museum of Paleontology.

The second view suggests that the last common bilaterian ancestor was a complicated coelomic creature and had both and appendages for movement and food collection and a complex nervous system. According to this view the coelom in different groups underwent reduction for various reasons related to the peculiarities of development, anatomy, and lifestyle. The hypothesis proposing that the last common bilaterian ancestor descended from a common coelenterates ancestor, which had radial symmetry and multiple chambers in the gastric cavity related to formation of the coelom, was originally created by British zoologist Adam Sedgwick (Quarterly Journal of Microscopical Science, 1884, 24, 43-82).

This idea was later developed in the works of professor Vladimir Malakhov, head of the Department of Invertebrate Zoology at the Faculty of Biology of the Lomonosov Moscow State University and the corresponding member of the Russian Academy of Sciences. (Journal of Common Biology, 2004, Nature, 2004, 6, 31-39).

Professor Elena Temereva of the Department of Invertebrate Zoology at Lomonosov Moscow State University, says they have succeeded in finding new evidence supporting the second point of view. The work derived from studies of Lingula anatina, which is a representative of inarticulate brachiopods. Lingula is one of the oldest brachiopods having survived survived to the present day. It is known from the Early Ordovician, about 500 million years ago. The fossils of Lingula are found all over the world. Most of the were found in Europe, Southeast Asian and North America.

"Our study shows that there is a group of the Lophophore animals among the Bilateria -- Lophotrochozoa taxon, which includes the largest variety of types of animals. The lophophore is a special organ that carries tentacles. Phoronids, brachiopods and bryozoans (ectoprocts) have collectively been called lophophorate, because they have the lophophore. However, multiple molecular phylogenetics data shows that there is no united group of the Lophophore animals," says Temereva, who says they showed otherwise using immunocytochemistry techniques, laser confocal microscopy, 3D-reconstruction and transmission electron microscopy.

Citation: Temereva EN, Tsitrin EB (2015) Modern Data on the Innervation of the Lophophore in Lingula anatina (Brachiopoda) Support the Monophyly of the Lophophorates. PLoS ONE 10(4): e0123040. doi:10.1371/journal.pone.0123040
News Articles
More Articles All Articles
About