Charles Darwin, for all his brilliance, was perhaps paralyzed by insecurity. There are not many other explanations for why he delayed publishing his seminal work, "On the Origin of Species by Means of Natural Selection, or the Preservation of Favoured Races in the Struggle for Life", until 1859.

The mutual affinities of organic beings and their embryological relations were clearly on the minds of everyone in the science world during the 19th century and an 1858 paper by Darwin and Alfred Russel Wallace to the Linnean Society secured their place in history books about natural selection but 27 years earlier Patrick Matthew had used the concept of 'evolution by natural selection' in his book "On Naval Timber and Arboriculture". That book, published in 1831, addressed best practices for the cultivation of trees for shipbuilding, but also expanded on his concept of natural selection.

Writing in the Biological Journal of the Linnean Society, Dr. Michael Weale, from the Department of Medical and Molecular Genetics at King's College London argues that Patrick Matthew deserves to be considered alongside Charles Darwin and Alfred Russel Wallace as one of the three originators of the idea of large-scale evolution by natural selection. Matthew (1790-1874), was a Scottish landowner with a keen interest in politics and agronomy. He established extensive orchards of apples and pears on his estate at Gourdie Hill, Perthshire, and became adept in horticulture, silviculture and agriculture. 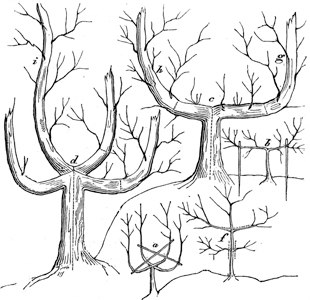 Plate from Naval Timber and Arboriculture by Patrick Matthew. The appendix on natural selection (Note B) appears on pages 364 - 369.

Outside historically-inclined evolutionary biologists, he gets little attention, though neither does Wallace or Lamarck. Only Darwin is known to the mass public. Yet Matthew was known at the time, at least to Darwin, who wrote in 1860 "I freely acknowledge that Mr. Matthew has anticipated by many years the explanation which I have offered of the origin of species", while Wallace wrote publicly in 1879 of "how fully and clearly Mr. Matthew apprehended the theory of natural selection, as well as the existence of more obscure laws of evolution, many years in advance of Mr. Darwin and myself", and further declared Matthew to be "one of the most original thinkers of the first half of the 19th century". 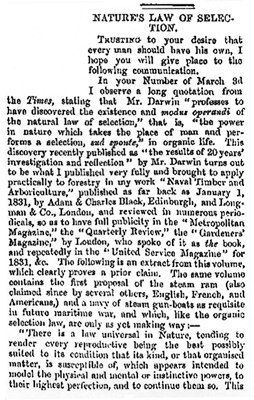 Beginning of the letter in Gardeners' Chronicle in which Matthew asserted his priority over Darwin with respect to the discovery of natural selection. Link

Darwin and Wallace were not poaching Matthew, but often left out is that Matthew's version of evolution by natural section captures a valuable aspect of the theory that isn't so clear in Darwin's version - namely, that natural selection is a deductive certainty more akin to a 'law' than a hypothesis or theory to be tested.

"There is a law universal in nature, tending to render every reproductive being the best possibly suited to its condition that its kind, or that organized matter, is susceptible of, which appears intended to model the physical and mental or instinctive powers, to their highest perfection, and to continue them so. This law sustains the lion in his strength, the hare in her swiftness, and the fox in his wiles." (Matthew, 1831: 364)

Though Matthew did not influence Darwin and Wallace, his writings provide a valuable third point of reference on the notion of macroevolution by natural selection, argues Weale, who has created a public website to act as an online repository of the writings by Matthew, including some of his lesser-known work.

"Whilst Darwin and Wallace both deserve recognition for their work, Matthew, the outsider who deduced his idea as part of a grand scheme of a purposeful universe, is the overlooked third man in the story. Matthew's story is an object lesson in the perils of low-impact publishing. Despite its brevity, and to some extent because of it, Matthew's work merits our renewed attention," says Weale.
News Articles
More Articles All Articles
About