News Staff
A new injectable polymer  called PolySTAT strengthens blood clots and that means that  soldiers who might otherwise die from uncontrolled bleeding before reaching a surgical hospital could be saved. Likewise for civilian traumas.

A tourniquet won't stop bleeding from a chest wound, and clotting treatments that require refrigerated or frozen blood products aren't always available in the field.

Enter PolySTAT, which is administered via a simple shot and finds any unseen or internal injuries and starts working immediately. It has been tested in rats, and researchers say it could reach human trials in five years. In the initial study with rats, 100 percent of animals injected with PolySTAT survived a typically-lethal injury to the femoral artery. Only 20 percent of rats treated with a natural protein that helps blood clot survived. 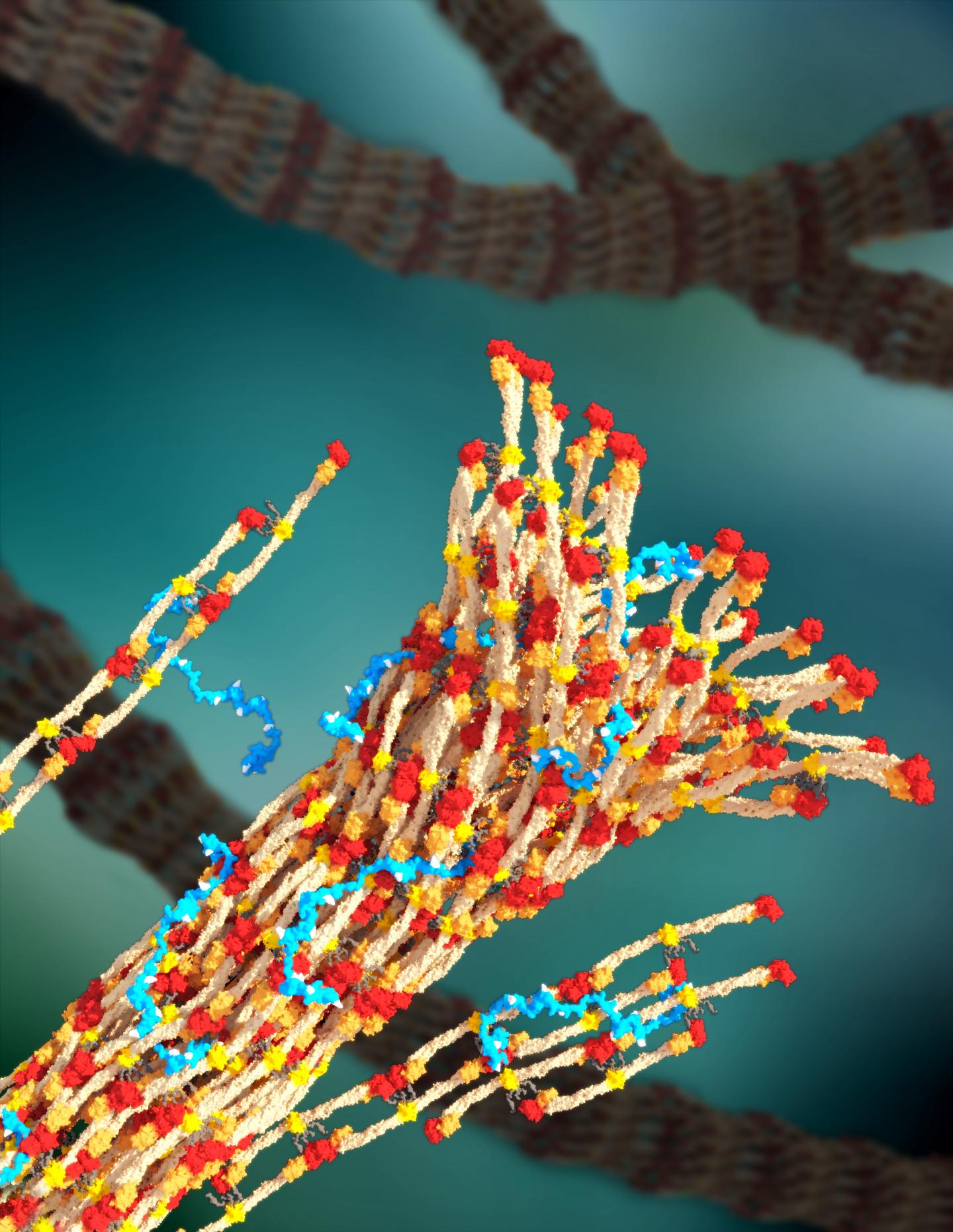 A 3-D rendering of fibrin forming a blood clot, with PolySTAT (in blue) binding strands together.
Credit: William Walker, University of Washington

"Most of the patients who die from bleeding die quickly," said co-author Dr. Nathan White, an assistant professor of emergency medicine who teamed with University of Washington bioengineers and chemical engineers to develop the macromolecule. "This is something you could potentially put in a syringe inside a backpack and give right away to reduce blood loss and keep people alive long enough to make it to medical care."

The team was inspired by factor XIII, a natural protein found in the body that helps strengthen blood clots. Normally after an injury, platelets in the blood begin to congregate at the wound and form an initial barrier. Then a network of specialized fibers -- called fibrin -- start weaving themselves throughout the clot to reinforce it.

If that scaffolding can't withstand the pressure of blood pushing against it, the clot breaks apart and the patient keeps bleeding.

Both PolySTAT and factor XIII strengthen clots by binding fibrin strands together and adding "cross-links" that reinforce the latticework of that natural bandage.

"It's like the difference between twisting two ropes together and weaving a net," said co-author Suzie Pun, the UW's Robert J. Rushmer Professor of Bioengineering. "The cross-linked net is much stronger."

But the synthetic PolySTAT offers greater protection against natural enzymes that dissolve blood clots. Those help during the healing process, but they work against doctors trying to keep patients from bleeding to death.

The enzymes, which cut fibrin strands, don't target the synthetic PolySTAT bonds that are now integrated into the clot. That helps keep the blood clots intact in the critical hours after an injury.

"We were really testing how robust the clots were that formed," said lead author Leslie Chan, a UW doctoral student in bioengineering. "The animals injected with PolySTAT bled much less, and 100 percent of them lived."

Blood products are expensive, need careful storage, and they can grow bacteria or carry infectious diseases, he said. Plus, the hundreds of proteins introduced into a patient's body during a transfusion can have unintended consequences.

After a traumatic injury, the body also begins to lose a protein that's critical to forming fibrin. Once those levels drop below a certain threshold, existing treatments stop working and patients are more likely to die.

In the study, researchers found PolySTAT worked to strengthen clots even in cases where those fibrin building blocks were critically low.

The UW team also used a highly specific peptide that only binds to fibrin at the wound site. It does not bind to a precursor of fibrin that circulates throughout the body. That means PolySTAT shouldn't form dangerous clots that can lead to a stroke or embolism.

Though the polymer's initial safety profile looks promising, researchers said, next steps include testing on larger animals and additional screening to find out if it binds to any other unintended substances. They also plan to investigate its potential for treating hemophilia and for integration into bandages.