News Staff
Around 3,000 farmers work 6,000 hectares in Veracruz, the west coast of Mexico, to grow potatoes (Solanum tuberosum). In recent decades, the fields of the Cofre de Perote area were affected by the presence of the golden nematode of potatoes (Globodera rostochiensis), also known as the yellow potato cyst nematode, a devastating plant pathogen, which reduced crop yields by more than 40 percent, leading to loss of income, loss of food and greater environmental strain due to making up the gap.

According to records of the Institute of Ecology (INECOL) in Mexico, there were 6,000 cysts per kilogram of soil of the nematode - European Organization for the Protection of Plants guidelines say anything over 40 cysts will affect crop yield.

In the pest, conquering it meant highly toxic chemicals but researchers from the Network of Biodiversity and Systematics at INECOL, have effectively located and tested a fungus capable of feeding from the nematode. Pest control was achieved without over use of pesticides and agriculture on the region improved. 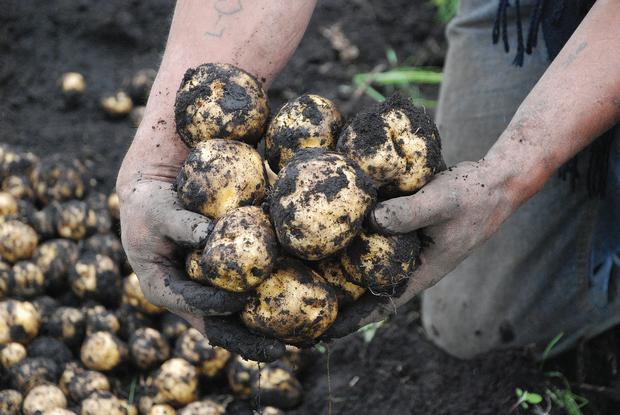 Plant parasitic nematodes are microorganisms that feed on the nutrients absorbed by the roots of plants; in the case of potatoes, instead of producing eight or ten tubers, an infected plant generates only four or five, and of a smaller size than usual.

"Mexico is considered the second center of origin of the potato, after Peru. When studying the case we saw that in the mountainous area of ​​Cofre de Perote wild tubers are present and that the region could have fungal antagonists for the golden nematode; after a scan we found some in 2005 that could be potential biological control agents. The process was accelerated because we saw that agrochemicals were handled carelessly, even by children, in addition that the compounds went into the groundwater through runoff or stayed in the tubers, making the damages greater" says Gloria Carrión Villarnovo, head of the INECOL project. "From the laboratory phase spent we went to the countryside, where fungi were were tested, until we found one that worked and which reduced up to 90 percent of the golden nematode population in two years by combining biological control with other methods for an integrated management.”

The bionematicide has a patent pending for Europe, United States and South America and a 15 liter bioreactor was acquired to reproduce the fungus used in the experiments. "We are on track to scale fermentation and produce it massively."

Solving the problem also meant changing habits and customs of farmers that favor the introduction and spread of agricultural pests and diseases, mainly in the region of the Cofre de Perote; this techniques can also be implemented in the regions where potatoes are grown and the golden nematode is present. The Biodiversity and Systematics Network is currently studying the major pest problems for the bean (Vicia faba), one of the crops used for rotation in the highlands of the state, using the same bionematicide and some other biocontrol agents.

"In Mexico we have the knowledge to deal with this kind of problems and to perform research focused on the generation of biological pesticides, which is a very important issue for agriculture due to the increasing restriction on the use of chemical pesticides" says Villarnovo.