Rydberg atoms, atoms whose outermost electrons are highly excited but not ionized, might be just the thing for processing quantum information. These outsized atoms can be sustained for a long time in a quantum superposition condition (a good thing for creating qubits) and they can interact strongly with other such atoms, making them useful for devising the kind of logic gates needed to process information.

Named for Swedish physicist Johannes Rydberg, these ballooned-up atoms are made by exciting the outermost electron in certain elements. Alkali atoms are handy for this purpose since they are hydrogen-like. That is, all the inner electrons can lumped together and regarded, along with the atom's nucleus, as a unified core, with the lone remaining electron lying outside; it's as if the atom were a heavy version of hydrogen.

The problem is that in they are difficult to handle. One approach is to search for special wavelengths -- "magic wavelengths" -- at which atoms can be trapped and excited into Rydberg states without disturbing them. A new JQI experiment bears out high-precision calculations made predicting the existence of specific magic wavelengths. 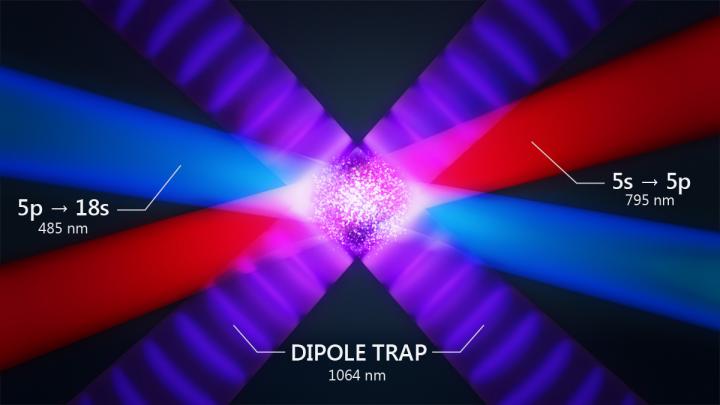 Rubidium atoms are held in place using a pair of laser beams at a wavelength of 1064 nm. Credit: Kelley/JQI

The main energy levels of atoms are rated according to their principle quantum number, denoted by the letter n. For rubidium atoms, the species used in this experiment, the outermost electron starts in an n=5 state. Then laser light was used here to promote the electron into an n=18 state. Unlike atoms in their ground state, atoms in the n=18 excited state see each other out to distances as large as 700 nm.

Rydberg atoms with higher values of n can interact at even larger separations, up to many microns. For comparison, the size of an un-excited rubidium atom is less than 1 nm.

The energy required to promote the atom to the 18s state directly would require a laser producing ultraviolet light, and the researchers decided it was more practical to boost the outer electron to its higher perch in two steps, using two more convenient lasers whose energy added to the total energy difference.

Rb atoms are in the trap in the first place because they have been gathered into a cloud, cooled to temperatures only a few millionths of a degree above absolute zero, and then maintained in position by a special trapping laser beam system.

The trapping process exploits the Stark effect, a phenomenon in which the strong electric field of the confining laser beam alters the energy levels of the atom. By using a sort of hourglass-shaped beam, the light forms a potential-energy well in which atoms will be trapped. The atoms will congregate in a tidy bundle in the middle of this optical dipole trap. The trouble is that the Stark effect, and along with it the trapping influence of the laser beams, depends on the value of n. In other words, a laser beam good for trapping atoms at one n might not work for other values of n.

Fortunately, at just the right wavelengths, the "magic wavelengths," the trapping process will confine atoms in both the low-lying n=5 state and in the excited n=18 state. The theoretical calculations predicting where these wavelengths would be (with a particularly useful one around a value of 1064 nm) and the experimental findings bearing out the predictions were published recently in the journal Physical Review A.

The first author on the paper is Elizabeth Goldschmidt from JQI. "We made a compromise, using atoms in a relatively low-n Rydberg state, the 18s state. We work in this regime because we are interested in interaction lengths commensurate with our optical lattice and because the particular magic wavelength is at a convenient wavelength for our lasers, namely 1064 nm." She said that in a next round of experiments, in the lab run by Trey Porto and Steve Rolston, will aim for a higher Rydberg level of n greater than 50.

JQI fellow Marianna Safronova helped to produce the magic wavelength predictions. "To make a prediction," said Safronova, "you need to know the polarizability -- the amount by which the Stark effect will shift the energy level -- for the highly-excited n=18 level. The job for finding magic wavelengths beyond n=18 with our high-precision first-principles approach would be pretty hard. Agreement of theoretical prediction with experimental measurement gives a great benchmark for high-precision theory."

"The most important feature of our paper," said Porto, "is that the theorists have pushed the theoretical limits of calculations of magic wavelengths for highly excited Rydberg atoms, and then verified these calculations experimentally."