News Staff
New evidence uncovered by a team from Imperial College London and the University College London (UCL) suggests that during the Hesperian Epoch, approximately 3 billion years ago, Mars sustained lakes of melted ice, each around 20 km wide, along parts of its equator. The discovery challenges scientists' previous understanding of Mars during the Hesperian Epoch, a period which was previously thought to be too cold and arid to sustain water on the planet's surface. The findings appear in the journal Geology.

Earlier research had suggested that Mars had a warm and wet early history but that between 4 billion and 3.8 billion years ago, before the Hesperian Epoch, the planet lost most of its atmosphere and became cold and dry. In the new study, the researchers analyzed detailed images from NASA's Mars Reconnaissance Orbiter, which is currently circling the red planet, and concluded that there were later episodes where Mars experienced warm and wet periods.

The researchers say that there may have been increased volcanic activity, meteorite impacts or shifts in Mars' orbit during this period to warm Mars' atmosphere enough to melt the ice. This would have created gases that thickened the atmosphere for a temporary period, trapping more sunlight and making it warm enough for liquid water to be sustained. 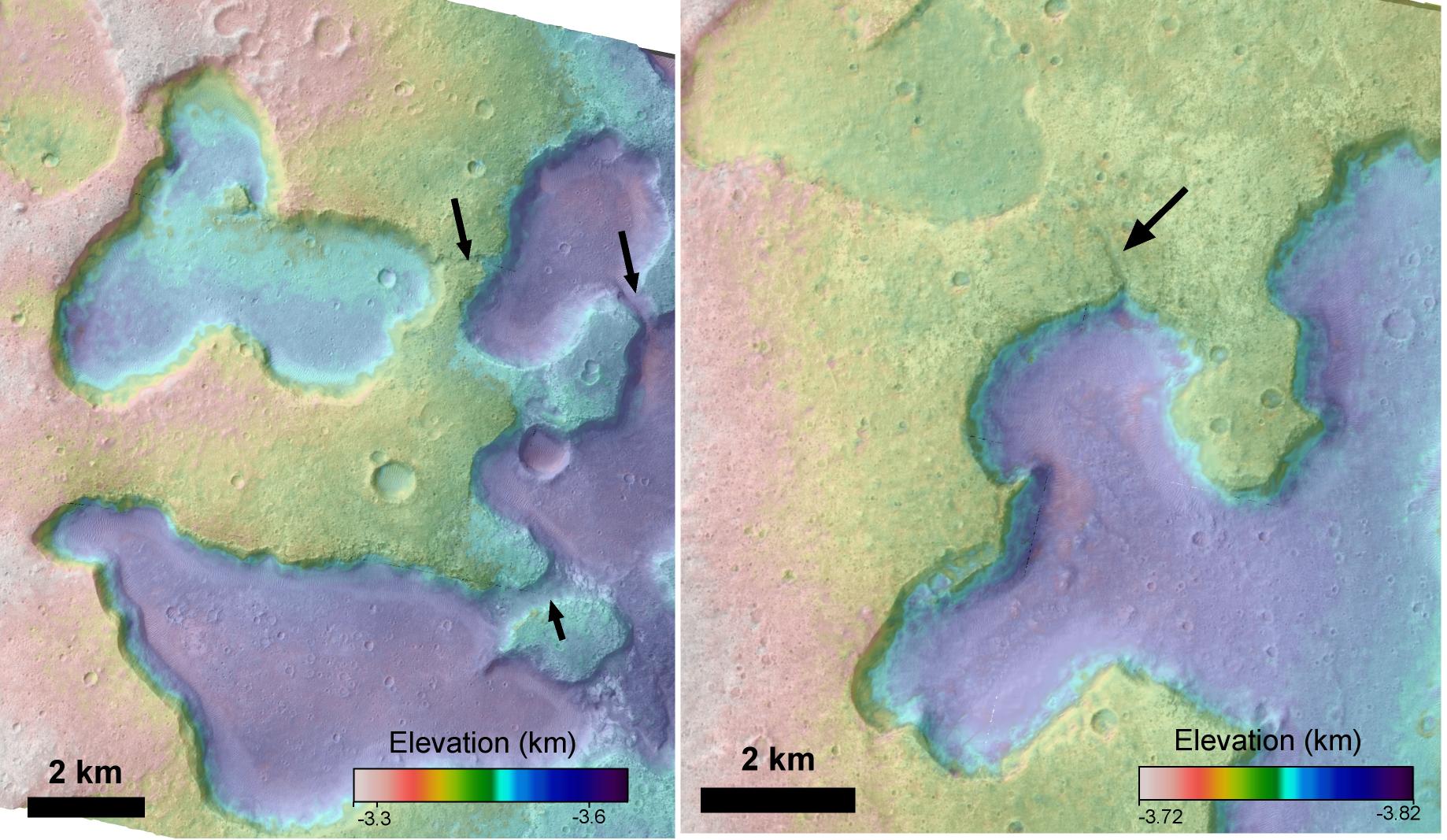 
Lead author of the study, Dr Nicholas Warner, from the Department of Earth Science and Engineering at Imperial College London, says that "most of the research on Mars has focused on its early history and the recent past. Scientists had largely overlooked the Hesperian Epoch as it was thought that Mars was then a frozen wasteland. Excitingly, our study now shows that this middle period in Mars' history was much more dynamic than we previously thought."

The researchers used the images from the Mars Reconnaissance Orbiter to analyze several flat-floored depressions located above Ares Vallis, which is a giant gorge that runs 2,000 km across the equator of Mars. Scientists have previously been unable to explain how these depressions formed, but believed that the depressions may have been created by a process known as sublimation, where ice changes directly from its solid state into a gas without becoming liquid water. The loss of ice would have created cavities between the soil particles, which would have caused the ground to collapse into a depression.

In the new study, the researchers analyzed the depressions and discovered a series of small sinuous channels that connected them together. The researchers say these channels could only be formed by running water, and not by ice turning directly into gas.

The scientists were able to lend further weight to their conclusions by comparing the Mars images to images of thermokarst landscapes that are found on Earth today, in places such as Siberia and Alaska. Thermokarst landscapes are areas where permafrost is melting, creating lakes that are interconnected by the same type of drainage channels found on Mars.

The team believe the melting ice would have created lakes and that a rise in water levels may have caused some of the lakes to burst their banks, which enabled water to carve a pathway through the frozen ground from the higher lakes and drain into the lower lying lakes, creating permanent channels between them.

Researchers determined the age of the lakes by counting crater impacts, a method originally developed by NASA scientists to determine the age of geological features on the moon. More craters around a geological feature indicate that an area is older than a region with fewer meteorite impacts. In the study, the scientists counted more than 35,000 crater impacts in the region around the lakes, and determined that the lakes formed approximately three billion years ago. The scientists are unsure how long the warm and wet periods lasted during the Hesperian epoch or how long the lakes sustained liquid water in them.

The study may have implications for astrobiologists who are looking for evidence of life on Mars. The team say these lake beds indicate regions on the planet where it could have been warm and wet, potentially creating habitats that may have once been suitable for microbial life. The team say these areas may be good targets for future robotic missions.

Next the team will extend their survey to other areas along the equator of Mars so that they can ascertain how widespread these lakes were during the Hesperian Epoch. The team will focus their surveys on a region at the mouth of Ares Vallis called Chryse Planitia, where preliminary surveys of satellite images have suggested that this area may have also supported lakes.