Through new experiments involving the famous Schrödinger cat state paradox, researchers have shown that a "quantum cat" can be both alive and dead, and in two places at once.

The results, which involve inducing a large number of photons to have matching states (or to become entangled), show the ability to manipulate complex quantum states, with applications for computation and long-distance communication. They also represent perhaps the first time scientists have been able to achieve such quantum coherence at a macroscopic scale.

The case of Erwin Schrödinger's cat is a famous thought experiment from 1935 that explores the way in which a quantum system, such as an atom or photon, can exist as a combination of multiple states, a phenomenon known as quantum superposition. An unfortunate cat, he explained to Einstein, which is trapped in a box, may or may not be alive - scientists analyzing the box from the outside cannot know the state of the cat unless they open the box. Thus, the cat is both alive and dead when it is not observed.

Similarly, in quantum physics, subatomic particles may be in one state or another. Subatomic particles, however, can be "linked" across space. Here, Chen Wang et al. took two separate spatial cavities and applied light waves in such a way that only one wavelength may exist in the cavities at a time, giving the two spatially separated areas similar qualities. The two cavities were joined by a supercurrent, a current that flows without any voltage applied. The team then subjected photons in one cavity to a maze of gates that gave them a distinct spin. This way, the researchers were able to give the photons two states (like the cat, dead or alive), and they observed the similar state in photons in the adjoining cavity. 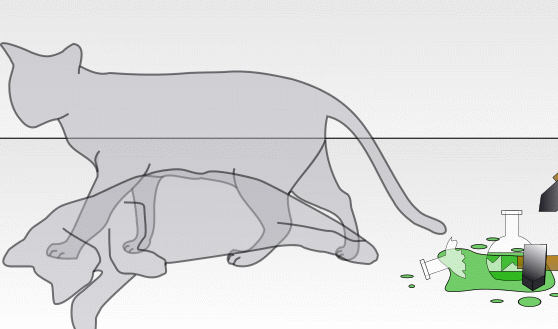 So far, Wang et al. have measured "cat sizes" of up to 80 photons, and larger sizes can be achieved by implementing specially controlled pulses, the authors say.