The public is not aware of this, but academic science is more like a small business than being part of a vast university structure. An investigator is the business owner and the researchers are independent contractors, augmented by graduate students who go to the school.

In that sort of environment, where the life and death of the business is determined by beating other labs for a finite pool of money, while the government spends billions to try and increase the number of competitors who want to be in government-funded academia rather than the private sector, competitive instincts run high.

Sharing data either dilutes the strength of a research group or it allows a competitor to have a shortcut that another lab funded.  Lose-lose.

But even knowing that risk, a lot of investigators support the idea of more sharing. It has worked in physics and a new paper finds that policies put into place by major funding agencies like the National Institutes of Health (NIH), and to a lesser extent by scientific journals, appear to be meeting the goal of increasing the sharing of scientific resources among life science investigators.

The survey says 65 percent of surveyed investigators at major U.S. research institutions believed that NIH policies instituted in recent years had markedly improved the sharing of scientific data. But the survey also identified some unexpected problems, including the number of researchers who share materials or resources without completing legal agreements required by their institutions. 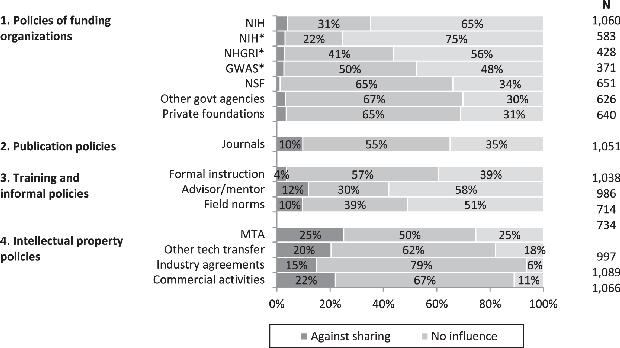 "There have been a lot of changes in data-sharing policies over the past 10 to 12 years, and new tools for data-sharing have become available," says lead author Genevieve Pham-Kanter, PhD, assistant professor of Health Management and Policy at Drexel University School of Public Health in a statement. "At the same time, there have been moves by many universities and academic health centers to preserve their intellectual property and limit sharing. Since there had been very little systemic evaluation of how these policies have affected scientists and their sharing behavior, we wanted to get a sense of which policies were working and which were not."

The current study is a follow-up to a report published in 2000 by Massachusetts General Hospital (MGH) investigators that revealed 44 percent of geneticists and almost a third of other life scientists admitted withholding data that had been requested by other investigators, despite the fact that freely sharing the data underlying published studies is considered essential to scientific progress. Since that time, the NIH and other major funders have required that major grant applications include plans for sharing data acquired in supported studies.

The success of the Human Genome Project greatly relied on collaboration and data sharing among investigators at research centers worldwide, the authors note, and a number of repositories of genomic data have been established to facilitate data sharing. Many major journals now require authors to submit online supplements that describe in great detail the procedures utilized and data acquired in studies submitted for publication.

To measure the impact of these changes, Pham-Kanter and her co-authors – Eric G. Campbell, PhD, Mongan Institute for Health Policy at MGH, and Darren Zinner, PhD, Heller School for Social Policy and Management, Brandeis University – surveyed 3,000 investigators at the 100 U.S. universities and medical schools that received the most NIH funding in 2010. Along with 600 researchers from clinical and 600 from nonclinical departments, 1,800 investigators who either worked in genetics departments or had received funding from genetics-focused federal agencies were included, reflecting how essential data sharing is to that particular field. Almost 1,200 investigators completed and returned the survey.

While NIH policies were judged to have the greatest positive impact on data sharing and were ranked particularly high by genetics researchers, the policies of other institutions such as the National Science Foundation and private foundations were judged to have a modest impact on increased sharing. The impact of journals' data-sharing policies was determined to be only moderate, with more than half of respondents believing there was no effect, but online journal supplements were considered helpful by 58 percent of respondents.

Specific types of intellectual property policies, which place conditions on what data can be shared, were believed to discourage data sharing by from 15 to 25 percent of survey respondents. One surprising finding was that almost 25 percent of respondents reported sometimes or always neglecting to file material transfer agreements (MTAs) – contracts that outline the rights and responsibilities of both parties and define the appropriate use of materials – when sharing materials with investigators at other institutions. Reasons given for failing to file such agreements include the amount of time, work and red tape involved in their preparation.

"If investigators share biomaterials without an MTA, they may be liable for any adverse effects of those materials, even if they result from improper use or handling by the recipient," explains Campbell, a professor of Medicine at Harvard Medical School. "The number of survey respondents who admit not filing MTAs indicates that we need to find ways to make these agreements less onerous to complete. This is clearly a major issue for universities to address."

Other potential problems indicated by the findings were that almost one-third of the respondents who review NIH grant applications did not consider data-sharing plans to be important to their decision-making and that few formal or informal sanctions are imposed against those who refuse to share their data.

"Our paper points out the important influence that third parties like the NIH, other funding agencies and scientific journals have had on data sharing practices," says Pham-Kanter, who also is a research fellow at the Edmond J. Safra Center for Ethics at Harvard University. "Individual investigators and even research institutions, which have their own interests to protect, can't do this on their own; so work still needs to be done to resolve and clarify the tensions between the needs of investigators, the interests of institutions and the scientific benefit to be gained by broad sharing of scientific data."