News Staff
Dietary masochists say you should endure the most difficult brown bread imaginable because 1,000 years ago people had no choice. It's vaguely healthier, we are all told, though if you read more than a few epidemiology studies and saw the lack of methodology you know it casts on doubt almost every health claim made by matching populations to specific foods, not to mention the bizarre beliefs promoted by prominent nutrition 'experts'.

White bread became so popular because it is just better. People prefer it in the bread-centric regions like America and Europe. Yet it contains fewer fibers than brown bread and lack of dietary fibers in the European is linked to diabetes, obesity and even cancer by, you guessed it, epidemiologists. The EU funded HEALTHBREAD project, which was completed in September 2014, came up with a solution: providing the nutritional benefits of brown bread, while retaining other sensory qualities that people love in white bread.

“We wanted to put the nutritional benefits of wholemeal bread - and possibly even beyond that - in bread products that have the taste and other qualities of white bread,” Jan-Willem van der Kamp told youris.com. He is the project coordinator and a senior officer for international projects at the Food and Nutrition department of TNO in de Bilt, the Netherlands. 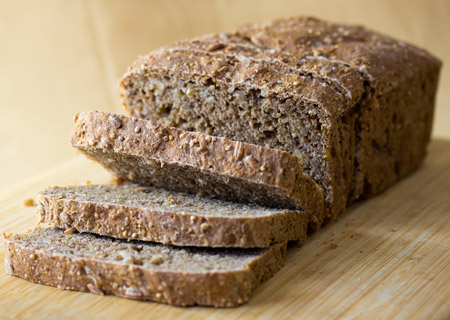 Surely science can find a way to give us the fiber of this cardboard bread while the taste and attractiveness of white bread is maintained. Credit: Veganbaking.net

The bran around the white kernel of the grain has all the good nutrients and fibres but also the bitter taste and the dark color, according to van der Kamp. So the project has developed a clever milling process. It is able to select those parts of bran that have the good nutrients without conferring the disagreeable taste some people attribute to brown bread. Changing the fermentation processes used in bread making added even more beneficial qualities.

During the development, the team has experienced some difficulties: “The main problem was that if you just increase the nutritional component you get bad bread quality. No good texture, no good bread volumes,” says van der Kamp, and added, “So the bread making process itself, the baking, also needed to be changed.” As it turned out subtle changes, adding certain enzymes and vitamin-C, solved the problem.

Industry and trade partners had a very important role to play in this project too. “The aim was that each of the participating bakeries should develop it’s own bread, “ says van der Kamp. “Five of the bakeries put it on the market, and the consumers were even willing to pay a higher price.” And it has been a success, so far. “Some of the products are already on the market – which is more than was expected. Also beyond expectation is the fact that the industry has created a HEALTHBREAD association and will continue to expand the project.”

Other scientists in the field agree that dietary fiber is important for the health of the general population: “ The European population should of course be encouraged to eat more fiber-rich fruit and vegetables, but these might be expensive, or unavailable,” Marina Carcea, an expert in the food Industry and a senior technologist at Entecra in Rome, Italy, tells youris.com. “And bread is easy and cheap, so improving the dietary fiber content in bread is a good and easy way to address this problem,” she adds.

However, it is important to replace the research into the wider context of a well-fed European population. “Certainly, a section of the EU population eats far too much, people should be more aware of the caloric content of the foods they consume,” points out Carcea.

However, this novel bread could have some positive consequences. “The new type of bread is more nutritional and the extra amount of fibres [it contains] will [result in people eating] less of it,” says Kati Katina, assistant professor of food sciences at the University of Helsinki, Finland.

Clearly the potential health benefits will outweigh possible downsides. “It’s more expensive but you need to see the bigger picture here. The health benefits should be taken into consideration,” Katina tells youris.com. “ Not only will it help fight illnesses like obesity, diabetes, coronary diseases and certain types of cancer, but in doing so it will ultimately save money because these afflictions will be less of a burden on society.”
News Articles
More Articles All Articles
About