University of Illinois nutritionists say they have found compounds that boost liver detoxification enzymes nearly 5X, and they've found them in the crushed seeds left over after oil extraction from an oilseed crop,
Camelina sativa, used in jet fuel.

Oilseed crops, including rapeseed, canola, and camelina, contain some of the same bioactive ingredients, like glucosinolates and flavonoids, found in broccoli and other cruciferous vegetables and in nearly the same quantities. Because the oil from oilseed crops is used for biofuel, scientists have been hoping to find a green use for the protein-rich seed meal left after oil extraction.

Animal feed is the obvious choice, but some rapeseed glucosinolates are toxic, and producers have balked at paying Canada for canola seed, the low-glucosinolate rapeseed that country had developed. 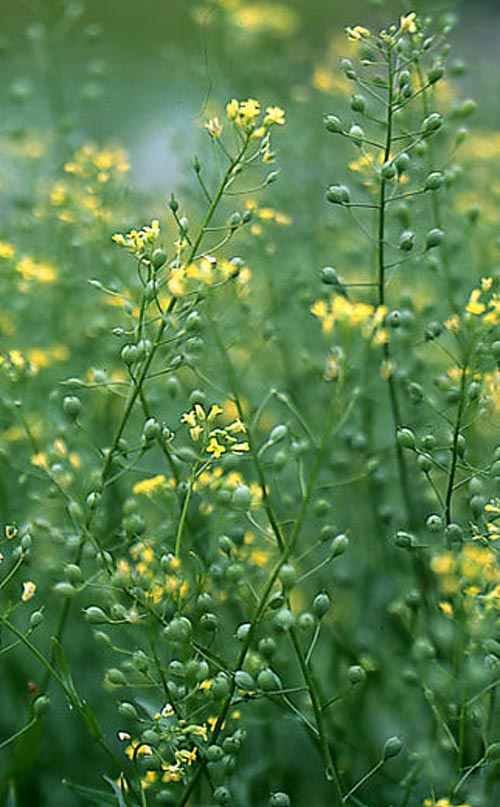 "The bioactive compounds in Camelina sativa seed, also known as Gold of Pleasure, are a mixture of phytochemicals that work together synergistically far better than they do alone. The seed meal is a promising nutritional supplement because its bioactive ingredients increase the liver's ability to clear foreign chemicals and oxidative products. And that gives it potential anti-cancer benefit," said Elizabeth Jeffery, a University of Illinois professor of nutritional toxicology.

Jeffery thought Camelina sativa was worth a look so she began to work with USDA scientist Mark Berhow. In the first study of camelina's bioactive properties, Berhow isolated four major components—three glucosinolates and the flavonoid quercetin—from its defatted seed meal.

Back at the lab, researchers began to test these components on mouse liver cells both individually and together. They found that all four major camelina bioactives induced the detoxifying liver enzyme NQO1 when they were used alone. However, when a particular glucosinolate, GSL9, was paired with the flavonoid quercetin, there was a synergistic effect.

In all the experiments, the scientists used sulforaphane, the cancer-protective component of broccoli, as a control because it is known to induce NQO1, the detoxifying enzyme. Like camelina seed meal, broccoli contains the flavonoid quercetin, so they decided to look for synergy between sulforaphane and quercetin.

"As had been the case with camelina's GSL9 and quercetin, the combined effect of quercetin and sulforaphane—in proportions found naturally in broccoli—was far greater than when either was used alone. This demonstrates to us the importance of eating whole foods. Thanks to synergy among its bioactive components, whole broccoli appears to be more powerful than purified sulforaphane that you might buy at a vitamin store or on the Internet," Das said.