Shale is the source of the United States' current natural gas boom and the lower greenhouse gas emissions it has brought. As if that is not wonderful enough, it could help solve another energy problem: what to do with radioactive waste from nuclear power plants.

The unique properties of the sedimentary rock and related clay-rich rocks make it ideal for storing the potentially dangerous spent fuel for millennia, according to a geologist studying possible storage sites who made a presentation at the latest National Meeting of the American Chemical Society (ACS).

As energy scientists know, about 77,000 tons of spent nuclear fuel currently sit in over a hundred storage facilities. Each is of varying age and requires constant security. The Yucca Mountain facility, scientifically the best place to put all of the waste from those individual locations, was derailed by the Obama administration in 2009, and even court orders can't get the government to obey its own laws regarding a decision on it. In all those aging temporary facilities, it could remain dangerous for tens or hundreds of thousands of years.  Terrorists would love to have access to nuclear waste.

Since the Obama administration has stonewalled sensible long-term nuclear-waste plan, finding other solutions is a priority. It remains crucial because nuclear fuel continues to produce heat and harmful radiation after its useful lifetime. In a nuclear power plant, the heat generated by uranium, plutonium and other radioactive elements as they decay is used to make steam and generate electricity by spinning turbines. In temporary pool storage, water absorbs heat and radiation. After spent fuel has been cooled in a pool for several years, it can be moved to dry storage in a sealed metal cask, where steel and concrete block radiation. This also is a temporary measure. 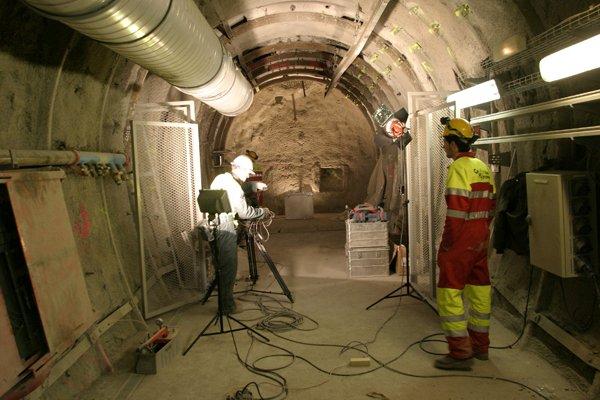 Researchers in underground labs like this one in France are studying whether shale formations are safe for long-term storage of nuclear waste.  Credit: Andra/E. Sutre

Dr. Chris Neuzil, Ph.D.  of the U.S. Geological Survey also warned that natural disasters can threaten surface facilities, as in 2011 when a tsunami knocked cooling pumps in storage pools offline at the Fukushima Daiichi nuclear power plant in Japan.

But shale deep under the Earth's surface could be a solution. France, Switzerland and Belgium already have plans to use shale repositories to store nuclear waste long-term. Neuzil proposes that the U.S. also explore the possibility of storing spent nuclear fuel hundreds of yards underground in layers of shale and other clay-rich rock. He is currently investigating a site in Ontario with the Canadian Nuclear Waste Management Organization.

These rock formations may be uniquely suited for nuclear waste storage because they are nearly impermeable — barely any water flows through them. Experts consider water contamination by nuclear waste one of the biggest risks of long-term storage. Unlike shale that one might see where a road cuts into a hillside, the rocks where Neuzil is looking are much more watertight. "Years ago, I probably would have told you shales below the surface were also fractured," he said. "But we're seeing that that's not necessarily true." Experiments show that water moves extremely slowly through these rocks, if at all.

Various circumstances have conspired to create unusual pressure systems in these formations that result from minimal water flow. In one well-known example, retreating glaciers in Wellenberg, Switzerland, squeezed the water from subsurface shale. When they retreated, the shale sprung back to its original shape faster than water could seep back in, creating a low-pressure pocket. That means that groundwater now only flows extremely slowly into the formation rather than through it. Similar examples are also found in North America, Neuzil said.

Neuzil added that future glaciation probably doesn't pose a serious threat to storage sites, as most of the shale formations he's looking at have gone through several glaciations unchanged. "Damage to waste containers, which will be surrounded by a filler material, is also not seen as a concern," he said.

He noted that one critical criterion for a good site must be a lack of oil or natural gas that could attract future interest.