Melatonin, a hormone that governs sleep and jet lag in humans, may also drive the mass migration of plankton in the ocean, according to a report by scientists at the European Molecular Biology Laboratory (EMBL) in Heidelberg.

Melatonin, is essential to maintain our daily rhythm, and the scientists have now discovered that it governs the nightly migration of a plankton species from the surface to deeper waters. The findings, published online today in Cell, indicate that melatonin's role in controlling daily rhythms probably evolved early in the history of animals, and hold hints to how our sleep patterns may have evolved.

In vertebrates, melatonin is known to play a key role in controlling daily activity patterns – patterns which get thrown out of synch when we fly across time zones, leading to jet lag. But virtually all animals have melatonin. What is its role in other species, and how did it evolve the task of promoting sleep? 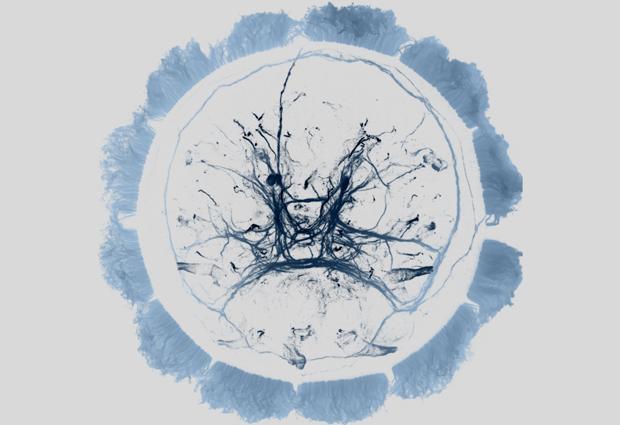 Every night, an increase in melatonin levels in this larva's brain makes it move away from the sea's surface. Credit: EMBL/M.A.Tosches

To find out, Detlev Arendt's lab at EMBL turned to the marine ragworm Platynereis dumerilii. This worm's larvae take part in what has been described as the planet's biggest migration, in terms of biomass: the daily vertical movement of plankton in the ocean. By beating a set of microscopic 'flippers' – cilia – arranged in a belt around its midline, the worm larvae are able to migrate toward the sea's surface every day. They reach the surface at dusk, and then throughout the night they settle back down to deeper waters, where they are sheltered from damaging UV rays at the height of day.

"We found that a group of multitasking cells in the brains of these larvae that sense light also run an internal clock and make melatonin at night." says Detlev Arendt, who led the research. "So we think that melatonin is the message these cells produce at night to regulate the activity of other neurons that ultimately drive day-night rhythmic behaviour."

Maria Antonietta Tosches, a postdoc in Arendt's lab, discovered a group of specialised motor neurons that respond to melatonin. Using modern molecular sensors, she was able to visualise the activity of these neurons in the larva's brain, and found that it changes radically from day to night. The night-time production of melatonin drives changes in these neurons' activity, which in turn cause the larva's cilia to take long pauses from beating. Thanks to these extended pauses, the larva slowly sinks down. During the day, no melatonin is produced, the cilia pause less, and the larva swims upwards.

"When we exposed the larvae to melatonin during the day, they switched towards night-time behaviour," says Tosches, "it's as if they were jet lagged."

The work strongly suggests that the light-sensing, melatonin-producing cells at the heart of this larva's nightly migration have evolutionary relatives in the human brain. This implies that the cells that control our rhythms of sleep and wakefulness may have first evolved in the ocean, hundreds of millions of years ago, in response to pressure to move away from the sun.

"Step by step we can elucidate the evolutionary origin of key functions of our brain. The fascinating picture emerges that human biology finds its roots in some deeply conserved, fundamental aspects of ocean ecology that dominated life on Earth since ancient evolutionary times," Arendt concludes.