In 2012, Republican Presidential candidate Mitt Romney was criticized for speaking an uncomfortable truth; 47 percent of voters are voting for the same party regardless of the actual policies. In academic science, the turnout will be huge for Democratic nominee Hillary Clinton because her actual science policies are irrelevant. Her stance on science is irrelevant because she does not need to cater to academics, she knows they are never voting for a Republican.

This is the same with religious people and Republicans. The only worry is 'will people stay home?' Meaning will their party vote. What rarely happens is catering to the 6 percent of swing voters who can really turn an election. With swing voters, you can't just rent a bus and take them to the polls, nor can you post flyers telling the opposing party voters the election has been changed to Wednesday, you have to appeal to their issues.

And the moderate middle is too much work, for both parties.

A new paper in The Annals of the American Academy of Political and Social Science titled "Elections in America" compared the positions of presidential candidates from 1980 to 2012 on a variety of political issues to the preferences of swing voters and of their own core supporters. He used data from American National Election Studies surveys, utilizing a "liberal-to-conservative" 100-point scale and adding viewpoints on government spending, government jobs, aid to African Americans, and defense spending. 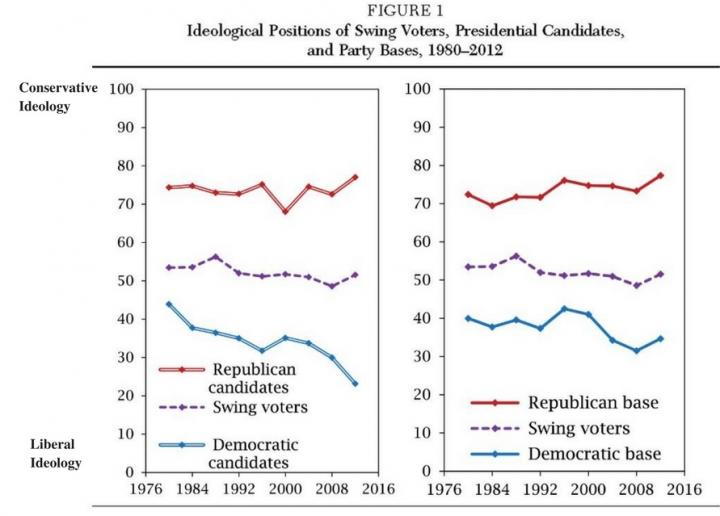 The paper's author, Larry M. Bartels of Vanderbilt University, concluded that the candidates' unresponsiveness to swing voters is not merely a reflection of the influence of core party members. The parties' respective bases have indeed become more polarized in recent years, with the Republican base making the more substantial shift. However, candidates' positions are frequently even more "extreme" than those of their core supporters.

"The idea that candidates' positions reflect strategic compromises between the preferences of core partisans and swing voters fares poorly here," Bartels wrote. "Perhaps they reflect the influence of much smaller, more extreme subsets of 'intense policy demanders' or big donors, activist groups, and grassroots conservative or liberal organizations distinct from the larger cadres of core partisans."