It's easy for western elites who already have homes and educations to lament encroachment of nature by humans living in remote areas without either, but the real world needs more practical solutions. A new EU program is attempting to help.

The Mara River, which originates in the Mau Forest, is the lifeblood of the entire ecosystem of the national park. Together the Mara River, the Mau Forest and the Serengeti constitute one of the world’s most complex ecosystems, and they support a great diversity of fauna and birdlife, as well as special and rare plants. But that is also what puts it at risk. Residents of the area live close to the park and are completely dependent on nature, so changes in natural resources - and population - are immediately apparent. 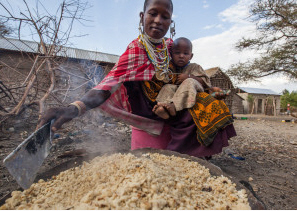 People in the Serengeti region cook with wood, causing problems with deforestation. Photo: Per Harald Olsen, Norwegian University of Science and Technology

Researchers are studying three different drivers of the pressure on the Serengeti-Mara ecosystem. One of the drivers is climate change. In recent years, the climate has become warmer, the dry season longer and the rains more powerful, resulting in soil erosion and washouts. The wet season has also shifted. All these factors create challenges for vegetation, animals and humans in the area.

Population growth is another driver. In 1961 Tanzania had 8,000,000 inhabitants. Today the number is 50,000,000, and in 20 years it is estimated to double. The population growth increases the need for food, and both legal hunting and poaching of wildlife have escalated in the Serengeti-Mara. Livestock numbers have also increased, intensifying the pressure on pasture lands.

Cooking primarily takes place on open fires, and the population growth means a growing demand for more firewood and building materials. The unique Mara Forest is now in the process of being cut down. Due to the expanding population, people are pushing farther and farther into the national park to extract natural resources.

Researchers are investigating the development of infrastructure. People in the area have gained greater access to electricity, and most Tanzanians are more prosperous than before. The road network is being developed, including a road planned to run through the national park that will cross the wildebeest migration route. This has generated great debate both nationally and internationally.

A new EU project is helping to create local expertise so Tanzanians can decide how to manage Tanzania. Nearly 100 scientists are involved in the research project entitled “Linking biodiversity, ecosystem functions and services in the Serengeti-Mara region, East Africa.” They come from 13 different research institutions in Kenya, Tanzania, Denmark, Norway, Germany, Scotland and the Netherlands. Norway, via NTNU and Eivin Røskaft, are in the driver’s seat for the project.
News Articles
More Articles All Articles
About