Beta Pictoris is a young star, only about 20 million years old, located about 63 light-years from us. It is surrounded by a huge disc of material, a very active young planetary system where gas and dust are produced by the evaporation of comets and the collisions of asteroids.

Flavien Kiefer (IAP/CNRS/UPMC), team leader that  analyzed more than 1,000 observations obtained between 2003 and 2011 with the HARPS instrument on the ESO 3.6-meter telescope at the La Silla Observatory in Chile, notes that for almost 30 years astronomers have seen subtle changes in the light from Beta Pictoris that were thought to be caused by the passage of comets in front of the star itself.

Comets are small bodies of a few kilometers in size that are rich in ices which evaporate when they approach their star, producing gigantic tails of gas and dust that can absorb some of the light passing through them. The dim light from the exocomets is swamped by the light of the brilliant star so they cannot be imaged directly from Earth. 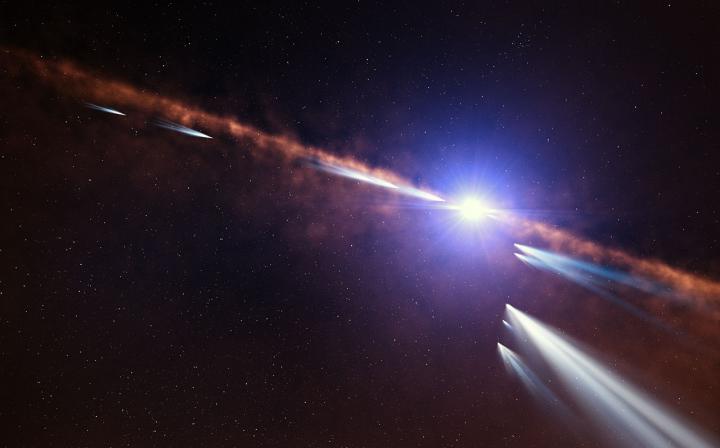 The researchers selected a sample of 493 different exocomets. Some exocomets were observed several times and for a few hours. Careful analysis provided measurements of the speed and the size of the gas clouds. Some of the orbital properties of each of these exocomets, such as the shape and the orientation of the orbit and the distance to the star, could also be deduced.

The analysis of several hundreds of exocomets in a single exo-planetary system is unique. It revealed the presence of two distinct families of exocomets: one family of old exocomets whose orbits are controlled by a massive planet, and another family, probably arising from the recent breakdown of one or a few bigger objects. Different families of comets also exist in the Solar System.

The exocomets of the first family have a variety of orbits and show a rather weak activity with low production rates of gas and dust. This suggests that these comets have exhausted their supplies of ices during their multiple passages close to Beta Pictoris.

Kiefer concludes, "For the first time a statistical study has determined the physics and orbits for a large number of exocomets. This work provides a remarkable look at the mechanisms that were at work in the Solar System just after its formation 4.5 billion years ago."