The evolution of trichromatic color vision in humans occurred by first switching from the ability to detect UV light to blue light between 80 and 30 million years ago and then by adding green-sensitivity(between 45-30 million years ago to the preexisting red-sensitivity in the vertebrate ancestor, according to Shozo Yokoyama et al. in PLOS Genetics.

The molecular basis of functional differentiation is a fundamental question in biology. To fully appreciate how these changes are generated, it is necessary to evaluate the relationship between genes and functions. This is a difficult task because new mutations can produce different functional changes when they occur with different preexisting mutations, causing complex non-additive interactions. 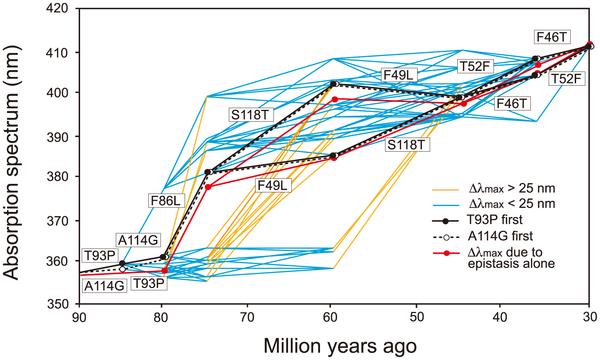 Eight most likely evolutionary paths used during the evolution of human S1. Human S1 evolution starting either with T93P (in black lines) or with A114G (in broken lines) are shown separately. In the background, a total of 442 evolutionarily accessible trajectories are given. The eight trajectories are characterized by the gradual increase in their λmax values, consisting of each step with |Δλmax|<25 nm. The path in red shows the λmax values predicted by considering only epistatic interactions among the seven mutations. Δλmax values smaller (in blue) or larger (in orange) than 25 nm are distinguished. Credit: doi:10.1371/journal.pgen.1004884

They found that 4,008 trajectories are terminated prematurely by containing a dehydrated nonfunctional pigment. Eight most likely trajectories reveal that the blue-sensitivity evolved gradually almost exclusively by non-additive interactions among the seven mutations.

These analyses demonstrates that the historical sequence of change is critical to our understanding of molecular evolution and emphasizes that genetic engineering of ancestral molecules is the key to decode the complex interactions of mutations within a protein and their effects on functional change.