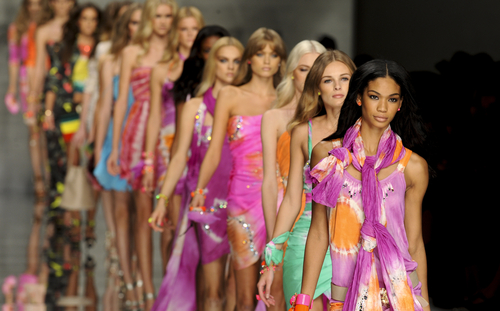 America is the fattest country on Earth and there are efforts being made to insure the 100 thin women still remaining don't set a bad example by not being obese. S. Bryn Austin, director of the Harvard Chan School's Strategic Training Initiative for the Prevention of Eating Disorders (STRIPED) and Director of the Sexual Orientation and Gender Identity and Expression working group is leading the call to prohibit thin fashion models from participating in fashion shows or photo shoots if they are too thin.

What is too thin? Social authoritarians know it when they see it. The op-ed in the American Journal of Public Health calls for the U.S. Occupational Safety and Health Administration (OSHA) to set regulations that would prohibit the hiring of models below a given body mass index, such as BMI < 18. The authors noted that the average runway model's BMI is typically below the World Health Organization's threshold for medically dangerous thinness for adults, BMI < 16.

BMI is an arbitrary metric, to actual health experts but the humanities scholars simply say it isn't, and is instead a necessary indicator. And America must do it because then designers would have to stop using thin models. International models are often referred to as "Paris thin" because the French lack our angst about not being obese, though that may soon change.  Last April, the French National Assembly passed a law that would ban the hiring of excessively thin models, but since last month they have more important things on their minds, like where all the terrorists are hiding.

"Designers would be hard pressed to maintain a presence in the fashion industry without participating in the New York City and Paris Fashion Weeks," the op-ed says.