News Staff
A trained scent dog has been found to accurately distinguish between benign and cancerous urine samples of thyroid cancer patients a terrific 88.2 percent of the time, according to a new study.

That canine diagnostic accuracy is only slightly less than that of fine-needle aspiration biopsy, the method generally used first to test thyroid nodules for cancer - but it is noninvasive and inexpensive.

Arny Ferrando, PhD, of  the University of Arkansas for Medical Sciences, previously "imprinted," or scent-trained, a rescued male German Shepherd-mix named Frankie to recognize the smell of cancer in thyroid tissue obtained from multiple patients. Ferrando, who noted that dogs have at least 10 times more smell receptors than humans do, said, "Frankie is the first dog trained to differentiate benign thyroid disease from thyroid cancer by smelling a person's urine." 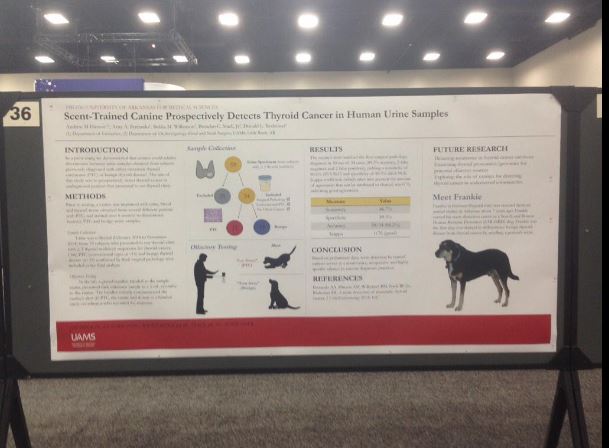 Ferrando had previously trained a dog, John D., to detect ovarian cancer and he was named the national Search and Rescue Hero Dog of the Year at the American Humane Association Hero Dog Awards. 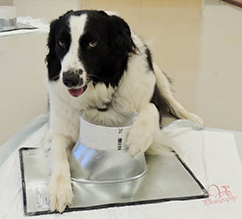 In this study, 34 patients gave a urine sample at their first visit to the university thyroid clinic before they went on to have a biopsy of suspicious thyroid nodules and surgery. The surgical pathology result was diagnosed as cancer in 15 patients and benign thyroid disease in 19. These urine samples were presented, by a gloved dog handler, one at a time to Frankie to sniff. Neither the dog handler nor the study coordinator, who recorded the dog's responses after the handler announced them, knew the cancer status of the 34 urine samples.

The handler interspersed some urine samples that had a known cancer status so he could reward the dog for correct answers: alerting to a cancer sample by lying down, and turning away from a benign sample to alert the absence of cancer.

The dog's alert matched the final surgical pathology diagnosis in 30 of the 34 study samples, the investigators reported. The sensitivity, or true-positive rate, was 86.7 percent, meaning Frankie correctly identified nearly 87 percent of the pathology-proven thyroid cancers. The specificity--the true-negative rate--was 89.5 percent, which meant Frankie knew that a benign sample was actually benign almost 9 of every 10 times. There were two false-negative results and two false-positives using canine scent detection.

"Current diagnostic procedures for thyroid cancer often yield uncertain results, leading to recurrent medical procedures and a large number of thyroid surgeries performed unnecessarily," said the study's senior investigator, Donald Bodenner, MD, PhD, chief of endocrine oncology at the University of Arkansas for Medical Sciences (UAMS) in Little Rock. "Scent-trained canines could be used by physicians to detect the presence of thyroid cancer at an early stage and to avoid surgery when unwarranted."