Flu vaccines can be a shot in the dark - they must they be given yearly and there's no guarantee the strains against which they protect will be the ones circulating once the season arrives.

New research suggests it may be possible to harness a previously unknown mechanism within the immune system to create more effective and efficient vaccines against this ever-mutating virus.

In a Cell paper, a team describes a new strategy that revolves around antibodies, immune proteins that target specific foreign proteins, called antigens. One end of the antibody latches on to an antigen, the other end, called the Fc region, binds to immune cells and so helps coordinate the immune response. 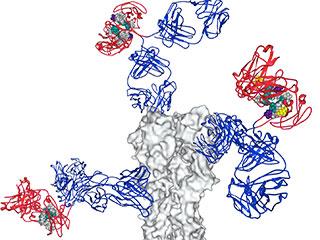 Antibodies bind to a flu virus protein (grey) with their variable regions (blue) forming an immune complex. The antibodies' Fc region (red) will bind to immune cells. Credit: Laboratory of Molecular Genetics and Immunology at The Rockefeller University

"While the conventional flu vaccine protects only against specific strains, usually three of them, our experiments show that by including modified antibodies within the vaccine it may be possible to elicit broad protection against many strains simultaneously," says senior study author Jeffrey Ravetch, professor of Molecular Genetics and Immunology at Rockefeller University. "We believe these results may represent a preliminary step toward a universal flu vaccine, one that is effective against a broad range of the flu viruses."

It was already known that chemical modifications to antibodies' Fc region altered their interactions with immune cells, including B cells, which produce antibodies. In experiments that began with human volunteers, the team, led by Taia Wang, an instructor in clinical investigation, and Jad Maamary, a post-doc, both in Ravetch's lab, investigated how changes to this region might be used to bolster an immune response: namely the production of more potent antibodies against the flu virus.

Every year in the United States, influenza is implicated in the deaths of thousands of people, mostly 65 and older, and causes serious disease in many others. The virus makes for a difficult target for vaccines because its strains are so diverse, and new ones are constantly emerging. Types A and B cause seasonal flu epidemics. Influenza A viruses are further broken down into subtypes based in part on their surface proteins, which include hemagglutinin, the "H" in H1N1, for example. The subtypes are further divided into strains.

Currently, most flu vaccines in the United States are formulated to target a total of three or four viral strains: H1 and H3 influenza A viruses, plus influenza B virus strains. The strains are selected based on public health experts' predictions for the coming flu season. But sometimes they are wrong, rendering the shots ineffective. A universal flu vaccine has become something of a holy grail, and a number of strategies have been proposed to create it. Work in the Ravetch lab suggests a new alternative: chemical modifications to the Fc region of antibodies. These regions go on form complexes with vaccine antigens, which then modulate the evolving vaccine response.

First, the researchers vaccinated healthy volunteers with a seasonal flu vaccine containing an inactivated strain of the H1N1 virus. They then tracked the volunteers' immune responses via blood samples, keeping an eye out for chemical modifications to antibodies against the hemagglutinin protein.

About seven days after the vaccination, they saw a spike in sialylated antibodies, meaning sialic acid, an important signaling molecule, had been added at a specific spot on the Fc region. The greater the sialylation, the better a person's response to the vaccine.

To tease apart how this chemical modification improves the immune response, the researchers used cell cultures and mice to study the effects of sialylated Fc regions binding to B cells. Their experiments revealed a complex interaction that ultimately pushes the B cells to produce antibodies with a higher affinity to their antigens.

It begins when a sialylated Fc region binds to a receptor protein known as CD23 on the B cells, prompting CD23 to activate a second receptor, FcγRIIB, which, in turn, discourages B cells producing low affinity antibodies. In this way, the sialylation on Fc regions establishes a high threshold for the immune response, so that only B cells producing the highest affinity antibodies are activated. The result of the higher affinity was broad protection against H1 subtype influenza viruses.

The researchers then used this knowledge to improve the vaccine itself. They modified the H1N1 vaccine so it contained not only protein from the virus itself, but also sialylated antibodies against that protein.

"When we immunized mice with just the H1 protein from one strain or with the sialylated complexes containing the same viral protein, we found both offered equal protection against the same strain of flu. However, when we exposed them to strains expressing different versions of the H1 protein, only the sialylated immunizations offered protection," Maamary says. "This was no small accomplishment, because H1 viruses can vary significantly from one another."

"The new mechanism we have uncovered, by which a vaccine containing sialylated antibodies elicits broadly protective antibodies, could potentially be harnessed to reduce the tremendous morbidity and mortality caused by seasonal influenza virus infections," Wang says. "We are now looking into applying this strategy toward improving existing vaccines; ideally, this would result in a vaccine that provides life long immunity against flu infections."