Solar energy wants to become an alternative source to fossil fuels but no one wants to incur the much higher cost required by continued subsidies. Rather than  trying to create large solar farms, which are invariably blocked by environmental lawsuits, the move is on to go small and avoid regulations - that means on buildings, clothes, consumer electronics and wearables. This necessitates ultra-thin film, low-cost and ideally flexible solar cells without compromising the environment during production, use, or disposal.

Most of us know that the most common inorganic solar cells, displayed over roof tops and in solar farms, are made of silicon. However, the production of silicon solar cells can be expensive and energy demanding and the final modules are heavy and bulky. Many lower-cost thin film solar cells, alternative to silicon, are composed of toxic elements such as lead or cadmium, or contain scarce elements such as indium or tellurium.

Now ICFO researchers have found a solution to this increasing problem. They have fabricated a solution-processed, semi-transparent solar cell based on AgBiS2 nanocrystals, a material that consists of non-toxic, earth-abundant elements, produced in ambient conditions at low temperatures. These crystals have shown to be very strong panchromatic absorbers of light and have been further engineered to act as effective charge-transporting medium for solution-processed solar cells. 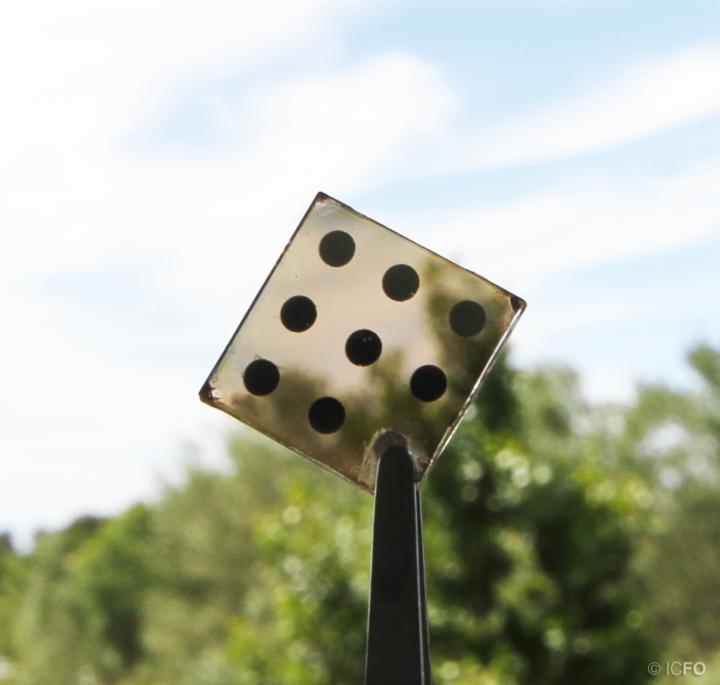 This image shows a semi-transparent solar cell based on AgBiS2 nanocrystals. Credit: ICFO

What is so special about these cells? As researcher Dr. Maria Bernechea comments, "They contain AgBiS2 nanocrystals, a novel material based on non-toxic elements. The chemical synthesis of the nanocrystals allows exquisite control of their properties through engineering at the nanoscale and enables their dissolution in colloidal solutions. The material is synthesized at very low temperatures (100ºC), an order of magnitude lower than the ones required for silicon based solar cells.´´

The team of researchers at ICFO developed these cells through a low temperature hot-injection synthetic procedure. They first dispersed the nanocrystals into organic solvents, where the solutions showed to be stable for months without any losses in the device performance. Then, the nanocrystals were deposited onto a thin film of ZnO and ITO, the most commonly used transparent conductive oxide, through a layer-by-layer deposition process until a thickness of approximately 35nm was achieved.

"A very interesting feature of AgBiS2 solar cells is that they can be made in air at low temperatures using low-cost solution processing techniques without the need for the sophisticated and expensive equipment required to fabricate many other solar cells. These features give AgBiS2 solar cells significant potential as a low-cost alternative to traditional solar cells." as Dr. Nicky Miller states.

These cells, in this first report, have already achieved power conversion efficiencies of 6.3%, which is on par with the early reported efficiencies of currently high performance thin film PV technologies. This highlights the potential of AgBiS2 as a solar-cell material that in the near future can compete with current thin film technologies that rely on vacuum-based, high-temperature manufacturing processes.

As ICREA Prof at ICFO Gerasimos Konstantatos concludes, "This is the first efficient inorganic nanocrystal solid-state solar cell material that simultaneously meets demands for non-toxicity, abundance and low-temperature solution processing. These first results are very encouraging, yet this is still the beginning and we are currently working on our next milestone towards efficiencies > 12%".

The results obtained from this study, which was financially supported by European Commission within the NANOMATCELL project, signifies a turning point in the concept and production of solar cells, moving from silicon cells to low-cost environmentally friendly solar cells that will definitely imply a safer and more sustainable world for the future.