The ice on Greenland formed due to processes in the deep Earth interior of the Arctic, large-scale glaciations that began about 2.7 million years ago. Prior to that, the northern hemisphere was so warm it was mostly without it, and that period lasted for 500 million years.

The big question geologically is why the glaciation of Greenland only developed so recently.

It's because of the interaction of three tectonic processes. Greenland literally had to be lifted up, so that the mountain peaks reached into sufficiently cold altitudes of the atmosphere. Greenland also needed to move sufficiently far northward, which led to reduced solar irradiation in winter. Then a shift of the Earth axis caused Greenland to move even further northward. 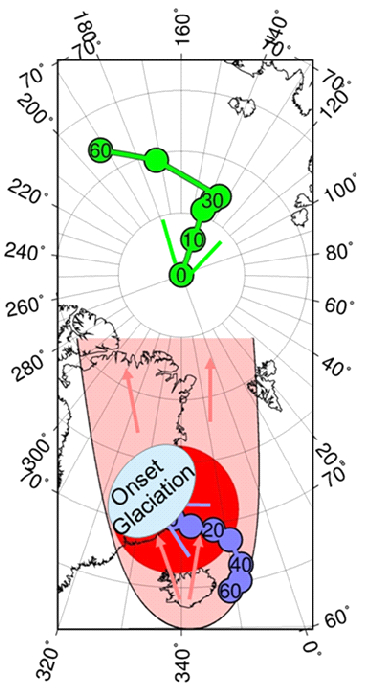 Schematic representation of the processes which preceded the glaciation in East Greenland. A: About 60 million years ago, the lithosphere was thinned by the Iceland Plume (red circle). During more recent times, plume material flowed northward (pink arrows) and lifted up the thinned lithosphere. B: Through tectonic plate motion Greenland was transported northward (dark blue; position from 60 million years ago until present-day). C: Through true polar wander (green arrow) the Earth axis shifted, bringing Greenland even closer to the North pole (Figure by B. Steinberger, GFZ).

These glaciations began in the East of Greenland. The authors of a new paper from the German Research Centre for Geosciences GFZ, Utrecht University, the Geological Survey of Denmark and Greenland (GEUS), and the University of Oslo, found hints in rock samples that the high mountains in the east of Greenland were only uplifted during the last ten million years, whereby this process happened especially fast since about 5 million years ago.

At that time, Greenland was still largely free of ice. Seismological investigations indicate that hot rocks rise underneath Iceland from the Earth's deep mantle. These observations were used as input in computer models by main author Bernhard Steinberger at the German Research Centre for Geosciences GFZ. "These hot rocks flow northward beneath the lithosphere, that is, towards eastern Greenland," Steinberger explains. "Because the upwelling beneath Iceland ?the Iceland plume ? sometimes gets stronger and sometimes weaker, uplift and subsidence can be explained."

The seismological investigations also showed that the lithosphere in the East of Greenland is especially thin - only about 90 kilometers thick. Earth scientists Steinberger and colleagues reconstructed the position of the tectonic plates 60 to 30 million years ago, and found that the Iceland plume was exactly beneath this part of Greenland during that time.

This explains why the lithosphere is so thin. For that reason, the eastern part of Greenland could also be more easily uplifted: Plume material can flow up to a depth of less than 100 km and therefore lift up the overlying lithosphere comparatively easily.

Whereas the Iceland plume remained in approximately the same position in the Earth mantle, Greenland moved as a tectonic plate, with a northward component of six degrees of latitude during the past 60 Million years, towards cooler regions.

This northward motion was amplified through "True polar wander": "Our computations show that the Earth axis shifted about 12° towards Greeland during the last 60 million years" GFZ researcher Steinberger says. Therefore, in combination with the tectonic plate motion, Greenland moved about 18° northward. It was now sufficiently far north, and its mountain tops in the East were sufficiently high, such that glaciations could be initiated.